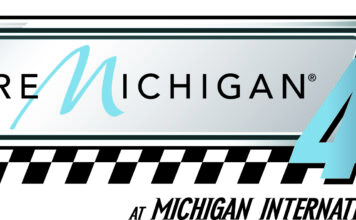 Watkins Glen Recap: Denny Hamlin finished 27th in Sunday’s 90-lap NASCAR Sprint Cup Series race at Watkins Glen International after being forced to stop on the final lap for fuel in the event won by Joey Logano. Hamlin needed one more late-race caution to make it to the end on gas, but the event stayed green from Lap 60 to the checkered flag, and the #11 FedEx Ground Toyota began to run out of the fuel on the backstretch of the long road course on Lap 89. It was an eventful day for the FedEx Racing Team at the 2.45-mile, seven-turn circuit. Hamlin started 13th and was running comfortably inside the top-15 in the early going. However, he was caught speeding on pit road during his first stop and forced to restart from the tail end of the field. During that restart, the field stacked up and Hamlin sustained significant damage to his car’s nose. The hood of the #11 FedEx Toyota flipped up and Hamlin drove two laps with limited vision. He pitted multiple times for repairs through the race’s midpoint, and returned to action still on the lead lap. Varying strategies among teams left some drivers, including Hamlin, close to making it to the scheduled distance. The race stayed green, however, and the strategy was foiled as Hamlin came to pit road on the final lap to get gas. Hamlin moved up one spot to 10th in the NASCAR standings following Watkins Glen, 192 points behind leader Kevin Harvick with four races remaining in the regular season.

Michigan Preview: The Series heads back to Michigan International Speedway for the second of two events at the wide, two-mile track. Hamlin is a two-time winner at Michigan, victorious in back-to-back June races in the Irish Hills in 2010 and 2011. Sunday’s race will feature a similar aerodynamic rules package to last month’s race at Indianapolis, in which Hamlin finished fifth. The FedEx Racing Team finished 11th at Michigan in June’s rain-shortened event won by Kurt Busch. Hamlin has eight top-10 finishes and has led 158 laps in 19 career Cup Series starts at MIS.

What did you learn about this rules package in Indianapolis that you can apply to this weekend?
“The two tracks are so different that it will be a whole new ballgame this weekend in Michigan. The banking will make the corner speeds higher than what they were at Indianapolis, and less time off the throttle. It will be interesting to see how the cars handle at Michigan with this package, as the track is so wide with multiple grooves. Friday and Saturday will be important for teams to collect information in practice to set the cars up as good as possible for Sunday’s race.”

Warren, Mich., Along for the Ride at MIS: The #11 FedEx Freight Toyota will feature the call letters “WRN” during the Pure Michigan 400 at Michigan International Speedway, recognizing the FedEx Freight service center in Warren, Mich.