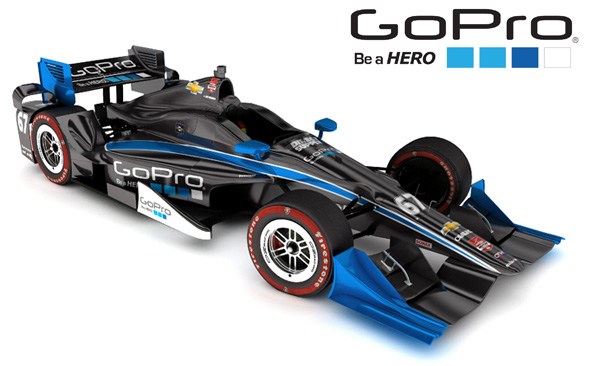 CFH Racing announced that GoPro will be the primary sponsor of the No. 67 GoPro Chevrolet driven by Verizon IndyCar Series championship contender Josef Newgarden in the GoPro Grand Prix of Sonoma on Aug. 30.

CFH Racing will be able to capture compelling content through the lens of the GoPro HERO4 Black, the flagship of the brand’s line of capture devices, which will be mounted on Newgarden’s car recording 4K Ultra HD video.

“We are really excited to see the GoPro brand on the No. 67 car. CFH Racing is a great collaborator, and to see them run the GoPro livery at the Grand Prix of Sonoma is going to be huge for the GoPro family watching the race,” said Rod Rojas, Motorsports Marketing manager for California-based GoPro.

Newgarden, 24, of Hendersonville, Tenn., has won two races and has two other podium finishes this season and is sixth in the standings entering the 85-lap race on the 2.385-mile, 12-turn road course. He is the series’ lap leader (366) through 15 races.

Newgarden also was among the title contenders in their IndyCars on Aug. 27 to drive across the Golden Gate Bridge. The Astor Cup, the trophy awarded to the series champion,  rode in the back seat of the INDYCAR Experience two-seater. The event was filmed on GoPro HERO4 cameras.

CORVETTE RACING IN 2021: Tandy Set to Join Corvette Racing in No. 4 C8.R for Full-Season Run

Russell to Mercedes, Aitken to Williams for 2020 Sakhir Grand Prix