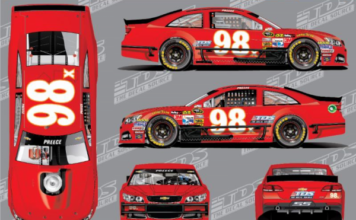 Preece’s car was designed to honor his grandfather, legendary car owner Bob Judkins, who sported the familiar red and white 2x Modified. “It’s very special to have a car that looks like my grandfather’s car,” Preece said. “I was lucky enough to drive for him a few times and win with him.”

Preece, who won the championship in NASCAR’s Whelen Modified Tour in 2013, is the current points leader of the series. He has scored four wins this season and has accumulated six top-fives and 12 top-10 finishes in 12 races.

“We’re looking forward to watching Ryan make his Cup debut this weekend,” said Tommy Baldwin. “I’m proud that our team can support his effort to further his stock car career.”

“I’m extremely lucky to have the support of Tommy Baldwin, I’m thankful to him for giving me this opportunity,” Preece said. “We have very similar personalities – we are both from the North, have a strong passion for Modified Racing and we both have a strong history in the Modifieds.

“I hope I can make my family, friends, and most of all, Tommy proud when we race at NHMS. We have our goals, and I hope we reach them. Thanks to everyone who has stepped up to make this possible, and I look forward to getting to race this Sunday.”

The company’s name is derived from the micro-blogging protocol of 140 characters and the “buzz” they create for clients. Visit 140 BUZZ on Facebook, Twitter, and its website.