NASCAR BTS: The Woman Behind the Monster 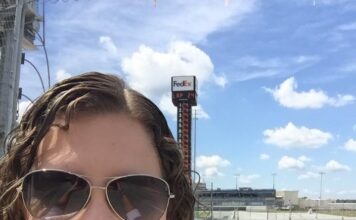 With the Dover, Delaware race weekend up next on the NASCAR schedule, fans are no doubt following Dover International Speedway on Facebook and @MonsterMile on Twitter to catch all the track doings, news and updates.

So just who is responsible for all the social media coming out of the Monster Mile? This week’s NASCAR Behind the Scenes reveals just who is behind that ‘monster’ and some may be surprised that it is actually a very talented young woman, Lynn Sudik.

“I create all the content on all of those outlets to promote our races. On race weekend, I’m running around taking pictures and encouraging people to stop by the Fan Zone. I’m tracking driver appearances and everything else that we have going on.

While Sudik has completed her undergraduate degree and is even pursuing her graduate degree in sports administration from Ohio University, her passion for racing also shone through as she described her background.

“I have wanted to work in motorsports for a very long time,” Sudik said. “I was born in Indianapolis so I got bitten by the racing bug very early on. What I love most about my job is that I get to do what I love. I’ve been coming to races as a fan for a very long time. And to be able to have that be my day-to-day job makes it feel like it’s not work.

“I’ve been here a little over a year, starting in April 2014, and I still have days, especially during race weekend where I have to stop and think ‘Do I really get paid to do this?’ It’s so incredible.”

While Sudik loves her work, she acknowledged some challenges, especially just keeping up with all of the emerging social media.

“With social media, there are always new things coming up and it’s always figuring out what is the best move for us and for our audience,” Sudik said. “You don’t have to be on every social media channel just because it’s out there. But you have to figure out what makes the most sense.

“Periscope is a great example. It really took off, thankfully right around our race. So, we were one of the first tracks to adopt it and now everybody jumped at the band wagon. Trying to keep up with trends and figuring out ways to make them work for us in our promotion is probably the biggest challenge in my work.”

Has anything ever gone viral for Sudik in her Monster role?

“A lot of the things I post about Dale Earnhardt Jr. get a lot of attention,” Sudik said. “I like to show my sense of humor in our posts. So, I found a picture of a squirrel; it was a meme. He had his arms out and it was right before the Daytona 500. And the caption is ‘NASCAR returns this weekend…can I get an Amen?’ And it got a couple thousand likes and a ton of shares and comments on Facebook.

One of Sudik’s favorite aspects of her role is interacting with the race fans, with whom she closely identifies.

“I plan a Tweetup every race weekend so that’s a cool way to get out there and meet people,” Sudik said. “If I’m walking around and I see a family that has a cool shirt on, I might take a picture of that. We always have our newlyweds at track. At our spring race, we had a couple wearing a bride and a groom hat with a sign that they were on their honeymoon. And so I got a picture of that and posted it.

“Actually Periscope has been a really awesome way to interact with fans just because when you’re live, people can ask you questions in real time. So the questions and comments are scrolling through as you are broadcasting. You can verbally respond in the moment so it’s a really cool way to get that interaction.”

Another fan interaction program that Sudik has helped create and develop is the programming for kids at the track.

“Monster Mile Youth Nation is our brand new kids’ club,” Sudik said. “It’s for race fans ages 14 and other. It’s a great way to introduce that next generation of fans to the track and to NASCAR itself.

“On race weekend, we have a designated Monster Mile Youth Nation area in our Monster Fun Zone. That’s where people go to pick up their welcome gift, which every member receives. It includes a water bottle, a die-cast car, a magnet, and a merchandise coupon. You also get a Fan Vision rental for the weekend, which is a $50 value for your $20 membership.

“This is the first year so we are trying out new things and trying to make it grow. The goal is to have interaction with kids on a regular basis. We are working on a newsletter, a micro-site with games, a NASCAR 101 section, and more information about the Monster Mile. I’d love to have events on non-race weekends as well for the members.”

From Periscoping all over the track to interacting with the kids, Sudik is most looking forward to this upcoming race weekend at Dover International Speedway.

“The fall race should be interesting with the Chase and the stakes being really high. How will Kyle Busch do? And will Jeff Gordon get another Monster trophy in his last try at the track?

“This is my dream job so I just love it when NASCAR is in town,” Sudik said passionately. “I can’t wait for everyone to be back and for cars to be on the track. I love the sound. I love the smell.

“It should be a really good show.”