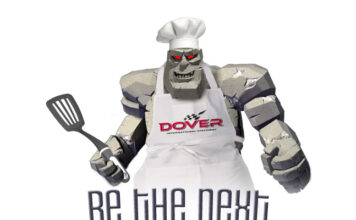 If you’ve ever wandered through the garage or camping areas at a NASCAR race, you know that there are some excellent cooks behind the grills and elaborate spreads on race day.

This week’s NASCAR BTS takes you behind the scenes of a unique contest, sponsored by @MonsterMile , giving fans the opportunity to become NASCAR’s next top chef.

“The contest is for our fans and followers to create and send in recipes for entrée items,” Lynn Sudik, Social Media Coordinator for Dover International Speedway, said. “We have a couple of parameters. It can be a hot or cold item, but it does have to be an entrée.”

There are several other parameters that the next NASCAR top chef must meet, including that their recipe must cost less than $3 per serving to make, as well as it must be able to be mass produced.  The latter criteria is because the winning entrée will actually be sold at the concession stands on race weekend.

The final rules are that all entries must include a list of ingredients, a photograph of the dish, and a brief synopsis of the inspiration for the recipe and how it relates to NASCAR racing at the Monster Mile.

“People can submit via our dedicated email account which is monstermilecontest@gmail.com and we are accepting recipes until February 10,” Sudik said. “After all of the submissions come in, we will narrow it down to four finalists who will be notified by February 17.”

“Those finalists will then have their dishes prepared for them at our Daytona 500 Watch Party on February 21. It will be held in Dover Downs Hotel and Casino at Fire and Ice.”

“We will have the dishes prepared by our chefs in the hotel for a panel of judges who will then decide who the winner is for the contest.”

Sudik is hoping that anyone who submits a recipe will plan to attend the Daytona 500 Watch Party. And the Speedway is throwing in a special incentive to entice their fans.

“They will get a free Dover throwback T-shirt if they do, while supplies last of course.  So, there is definitely an incentive for entrants to come to the Watch Party for the big reveal of the winner. But the winner does not have to be present in order for their dish to be chosen.”

According to Sudik, so far there has been a steady stream of recipes being submitted since the contest began on January 4. In fact, one fan got so excited that he posted the following to the Monster Mile website.

“I want to be in this contest. My entree is a Red Wine Marinated Black Angus Ribeye with a Mixed Pepper Salsa. This is the same entree I used at the Crew Chef Challenge at Pocono July 30, 2004. And yes, I won the contest. I have also cooked this entree for several teams at the track, including Morgan Shepherd and Carl Long at Dover. So let’s get cooking. I am ready to win.”

Sudik is hoping that kind of excitement continues all the way through the contest deadline and judging.

“We’ve got some good recipes that I actually want to try myself,” Sudik said. “So, we’re really excited about it and we think it’s going to produce some really tasty dishes.”

“We’ve got a wide variety of recipes like sandwiches and burgers but also some chicken dishes. It’s up to your imagination. I don’t want to reveal so much because there are such good recipes coming in.”

“It will be tough for the judges to decide on a winner.”

Not only does the winner have the privilege of being the Monster Mile’s top chef, but they also will get an experience of a lifetime come race day.

“The winner also gets two tickets and two cold passes to the May 15 Sprint Cup race here at the Monster Mile,” Sudik said. “They will also have their meals taken care of that day. We will also have a feature article about the winner on our website, in the spring souvenir program and across our social media platform.”

So, why is Dover Speedway undertaking the search for NASCAR’s next top chef?

“We’re always trying to figure out different ways to engage our fans and followers, especially during the off-season when the NASCAR news is a little slower,” Sudik said. “We thought this would be a good opportunity to generate some buzz and really involve our fans in our property.”

“At the end of the day, it is all about our fans.”