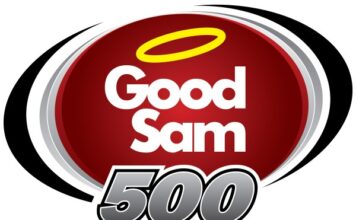 The second leg of NASCAR’s Western Swing takes place this weekend at Phoenix International Raceway with the Good Sam 500.  Here’s a look at how Ford has done at the one-mile facility since it began hosting NASCAR Sprint Cup Series races in 1988.

Alan Kulwicki, driving the No. 7 Zerex Ford, won his first NASCAR Sprint Cup Series race in the debut event at Phoenix International Raceway on Nov. 6, 1988.  Kulwicki, who celebrated by taking a Polish Victory Lap for which he is still remembered for today, passed leader Ricky Rudd with 16 laps to go and ended up taking the checkered flag in his 85th start by 18 seconds over runner-up Terry Labonte.  Fellow Ford drivers Davey Allison and Bill Elliott finished third and fourth, respectively.  Kulwicki, who ended up leading four times for 41 laps in taking the next-to-last event of the season, went on to win four more Cup races during his career.

Kurt Busch made Phoenix International Raceway history when he drove his No. 97 Irwin/Sharpie Ford Taurus to victory in the first NASCAR Sprint Cup Series night race held at the track on Apr. 23, 2005.  Busch dominated from the start as he led 132 of the first 133 laps, and while others like Brian Vickers and Michael Waltrip led multiple laps at different stages of the event, it was Busch who proved to be too strong down the stretch.  He passed Waltrip with 44 laps to go and was never threatened again as he won by 2.315 seconds.  Busch led 219 of the 312 laps as PIR hosted the first of two annual Cup dates each season for the first time.

Rusty Wallace had only three more chances to keep his streak of winning at least one race a season alive when he rolled into Phoenix International Raceway in 1998.  He had gone to victory lane in each of the previous 12 seasons and didn’t want to see it come to an end, so that’s why what he did on Oct. 25 was so impressive.  Wallace started sixth, but made a beeline to the front and pretty much stayed there all afternoon until rain came and halted the race after 257 laps.  The event was eventually called, marking the first rain-shortened race in the track’s NASCAR history, but there was no doubt Wallace deserved the win.  He led 196 of the 257 laps, including the final 73.  Wallace’s streak eventually reached 16 seasons before it was snapped in 2002.

The last time Ford went to victory lane at PIR in the NASCAR Sprint Cup Series came when Carl Edwards led 122 of 312 laps, including the final 78, to win the second race of the 2013 season.  The win snapped a 70-race winless drought for Edwards, whose previous victory came in Las Vegas in 2011.  Edwards’ victory may have statistically looked easy, but there were anxious moments, particularly at the end when a green-white-checker finish had most of the leaders wondering if they had enough gas in the tank to reach the end.  Edwards did and managed to beat Jimmie Johnson, Denny Hamlin, Brad Keselowski and Dale Earnhardt Jr. to the finish line.

Ford dominated at PIR from 1998-2002, winning 11 of the first 15 races at the one-mile facility, including consecutive victories by Davey Allison (1991-92) and Jeff Burton (2000-01).  Overall, Ford has 14 NASCAR Sprint Cup Series wins at PIR with Allison, Burton and Carl Edwards leading the way with two apiece.

Official Release
Previous articleThe Final Word – Las Vegas came with some distractions, and not all of them were in Nevada
Next articleRyan Reed – Phoenix Advance