You always remember your first time

My wife Sheryl leaned over to me and said “I think I want to cry!”.

That was very understandable since our 11 year old son Bradley already had tears running down his face while our 7 year old son Jared had about as sad a look on his face as you could have without crying.

Oh, and I think I may have muttered a few things under my breath that I can’t write in this space.

Aric Almirola’s crash on the 1st lap of Sunday’s Overton’s Pennsylvania 400 at Pocono Raceway was one in a series of twists and turns in a spectrum of emotions that filled the day of our 1st ever experience at a NASCAR race. My kids were decked out in RPM blue t-shirts and all of us had brand new NASCAR hats on to cheer on Aric.

As guests of Richard Petty Motorsports, it was sad to for us to see Almirola’s day end so early, but it was just a small part of what was, for the most part, a very exciting day for me and my family. Not fully knowing what to expect, we made the 2 ½ hour drive from our Long Island home to embark on a new adventure for us.

If you’ve never been to a NASCAR race before, you should make it your business to go because was about as unique and exciting of a sporting experience as I can remember. Qualifying was held on the same day as the race so it made for a long but thrilling Sunday, especially when you factor in the access that the fans had during the course of the day.

During qualifying, fans had an up close look at their favorite NASCAR drivers and young fans had an opportunity to be right down at pit road in a special kid’s area. To be completely transparent, our “hot” passes gave us some pretty cool VIP treatment, so we had a chance to meet a couple of the drivers in the garage area and we were able to spend some time with the RPM team and co-owner Andrew Murstein.

Andrew has been working tirelessly to return RPM to the top of NASCAR and with Richard Petty still a big part of the team, the quest continues to bring the “The King” back to where he belongs atop the NASCAR mountain. Petty continues to be very popular among the NASCAR fans. He draws huge crowds around him and signs every single autograph request.

It was really cool to see all of the teams and staff that we came across, but it was especially an honor to chat with Richard Petty’s long-time crew chief Dale Inman. He is a NASCAR Hall of Famer and considered to be the best crew chief of all time.

Inman, now a consultant for RPM, shared some great stories and upon learning that my son Bradley played football told us that he was a big Washington Redskins fan. We had a good chuckle, for obvious reasons, when I told him we were Jets fans. As a NASCAR novice, it was such an honor to chat with him and pick his brain.

We all had a chance to talk to some other members of the team so we were ready for our 1st foray into the NASCAR experience!

Inside Pocono Raceway was a fan fest and we had a chance to take pictures with race cars, enjoy some lunch, and also get the credit card out when the kids saw the various trailers filled with NASCAR merchandise. My son Jared clutched his Pocono Raceway mascot “Tricky” the whole day and Bradley picked up a couple of souvenir race cars including Aric Almirola’s #43. I’ll say this…NASCAR certainly knows how to take care of their fans even before a race even begins.

As we settled into our seats in the grandstand, the excitement started to build at the “Tricky Triangle”. There were special ceremonies on the track and the video boards showed highlight packages to get the crowd revved up for the race. There was also lots of attention paid to retiring NASCAR driver who was racing for the final time at Pocono Raceway.

The introduction of the drivers was very cool and you could just sense the excitement building from the crowd that continued to swell in numbers right up to the start of the race. The atmosphere was incredible and this is coming from someone who has been to the Super Bowl, World Series, NBA finals and Stanley Cup final. It was an incredible experience.

It was amazing to see the race begin and to hear how loud it gets. We had ear plugs but there’s no denying the noise that these cars can make and the speed at which they travel. You can’t appreciate this watching on television. You have to see it for yourself and the experience is second to none.

Because of the relationship that I’ve built up with Richard Petty Motorsports, we’ve adopted Aric Almirola as our favorite NASCAR driver. We felt just awful when he crashed and hope he bounces back in a big way next week when the Monster Energy Series continues at Watkins Glen. It’s still amazing to me that he was able to return just 8 weeks after that nasty crash at Kansas.

Our day ended with a pretty cool act of kindness by a member of the Pocono Raceway staff. When we were leaving the race, a staffer noticed that my sons’ were wearing light blue NASCAR shirts with “43” on them. Knowing what had happened in the race, he handed both Bradley and Jared a piece of Aric’s car tht had been taken off during the practice run on Saturday.

My two boys went from tears to cheers and they can’t wait to meet Aric one day and see him race again!

Thanks again to Andrew Murstein as well as RPM’s Chief Revenue Officer Sean Downes and Director of Communications Heather Lumpp for their amazing hospitality on Sunday and their incredible assistance all season long with this NASCAR novice.

I can tell you one thing…Sunday might have been my 1st NASCAR race but it certainly won’t be my last! 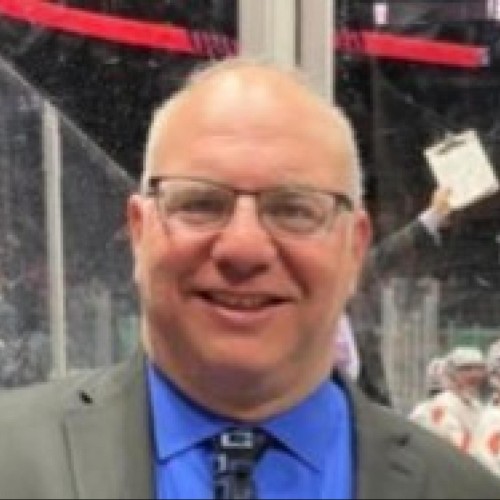 Peter Schwartz
Peter has been covering sports both in New York and across the country for almost three decades. He is an anchor for the CBS Sports Radio network as well as WCBS Radio in New York. Peter is also a writer for CBSNewYork.com as well as USAFootball.com and elitesportsny.com. He lives on Long Island with his wife Sheryl and their sons Bradley and Jared.
Previous article
Leavine Family Racing Earns Top-20 Finish Despite Penalty-Plagued Overton’s 400
Next article
The Final Word – Sunday was a perfect day for a pocosnooze at Pocono