Robert Yates Through the Years 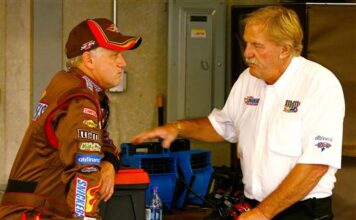 Robert Yates, a name known around the garage for decades sadly lost his battle with cancer Monday.

Many of the sports biggest stars drove for the iconic engine builder and owner, names like Dale Jarrett, Bobby Allison,  Ricky Rudd, and Davey Allison each drove for Yates during their career in Nascar.

In the photo, Ricky Rudd, driver of the No. 88 Snickers Ford, speaks with team owner Robert Yates, prior to practice for the Allstate 400 at the Indianapolis Motor Speedway on July 27, 2007, in Indianapolis, Indiana. Photo by Travis Lindquist/Getty Images for NASCAR.

In the year 1967, Robert Yates joined with Holman-Moody Racing. He started off as the manager in the team’s air gauge department. He worked hard building state of the art engines for the Wood Brothers and Junior Johnson. Yates would soon partner up with Junior Johnson.

From the years 1976 to 1985 Yates became a well-known name in and around the garage. His expertise and determination compelled him to succeed with Ricky Rudd, Darrell Waltrip, and Bobby Allison. Yates also built the engines in which Richard Petty scored his 199th and 200th win in the sport. Later on, Yates would start his own team.

driver and throughout the late 80s and early 90s, Allison would dominate the sport and quickly rose to fame. However, the team and sport were struck with the passing of Davey Allison in 1993 in which hit Yates and his team hard.

Dale Jarrett opened the 1996 season with a win in Nascar’s most iconic race, the Daytona 500. Jarrett would go on to battle for the championship but came up short. Going into the 1999 season, Jarrett, in his third year with the team, would go on to earn Robert Yates Racing their first championship.

“From the very first day I walked into the Robert Yates Racing Shop I learned that Robert knew every aspect and detail of his shop from the broom handle to (the) boardroom. Robert Yates was the smartest person in the racing industry from being the premier engine builder to aerodynamics, to chassis knowledge. He was the every and all of NASCAR racing competition and racing operations. And tremendously respected as such.”

In May of 2017, Robert Yates was given the news that he would indeed be the newest member of the Nascar Hall of Fame. Battling cancer Yates attended the announcements for 2018 class and hearing his name called brought a tremendous joy in the room for a man that has worked so hard finally have his success pay off. While he may not be there in person next January his legacy will live forever in this sport.

SM Staff
Previous articleThe Final Word – Dover is where they raced but Las Vegas is what is on our minds
Next articleRobert Yates, NASCAR Championship Owner, Dies at 74