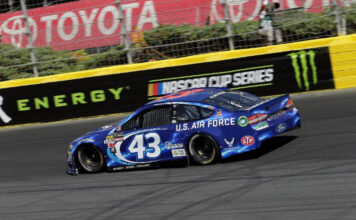 U.S. Air Force Returns to the No. 43 This Weekend
Aric Almirola Proud to Have Worked with Brave Men and Women

This Saturday is Veterans Day, and Richard Petty Motorsports is proud to have the United States Air Force as its primary partner throughout the weekend. The U.S. Air Force has been a supporter of RPM since its inception in 2009. Throughout the relationship, Richard Petty Motorsports has hosted high level Generals and service men and women from all across the country at the track. More importantly, the U.S. Air Force has helped educate and recruit at the track.

Aric Almirola and Richard Petty have played a role in the recruitment process. Almirola has attended many Delayed Entry Program swear-in ceremonies for the new Air Force men and women. Each race weekend, Petty himself shakes the hands and thanks each Air Force member.

This weekend, Almirola heads to the Phoenix International Raceway. He has a best finish of 10th and a best start of fifth.
“It’s been an honor to work with the U.S. Air Force and to help host the many Generals and guests. It’s been a humbling experience and something I’ve been really honored to do while at Richard Petty Motorsports. The men and women are fighting for our freedom, so we can race and go to the track each weekend. It’s always easy to say ‘thanks’ and meet them. It’s been rewarding for me.

“This will be my last time racing an U.S. Air Force car. We won Daytona together and that will forever be a special memory. It was my first Cup win, it came during the July 4th weekend, and to bring back the ’43’ to Victory Lane was really special. It’s cool to have that memory and have that experiences with the U.S. Air Force. It’s been a great partnership.”

No. 43 Smithfield Ford
A performance and marketing driven company, Richard Petty Motorsports, co-owned by NASCAR Hall of Famer Richard Petty and successful business entrepreneur Andrew Murstein, is one of the most recognized brands in all of motorsports. With a history of over 200 wins and business partnerships with national and global leaders, today the race operation fields one team in competition in the NASCAR premier series with driver Aric Almirola. Almirola wheels the iconic No. 43 Ford with partners Smithfield Foods, STP, United States Air Force and Fresh From Florida. The team is headquartered in Mooresville, N.C.