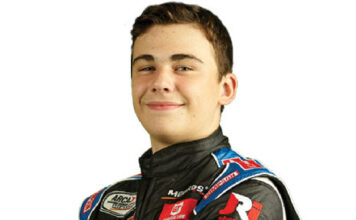 Statesville N.C. (December 5, 2018) – GMS Racing officials announced today that the Statesville, N.C., based organization would expand competition into the NASCAR K&N Pro Series East and West, as well as in the Automobile Racing Club of America (ARCA) Series in 2019. Sam Mayer, a Franklin, Wis., native will drive the No. 21 entry for the team in both series. Mayer is also scheduled to participate in four NASCAR Gander Outdoors Truck Series events beginning in August at Bristol Motor Speedway.

“GMS Racing has had tons of success over the past couple years, especially this past year,” said Mayer. “Knowing that a great team is behind me going into next season gives me a lot of confidence that we will have success, too.”

In 2018, Mayer competed in six K&N East races with his highest finish being fourth-place at Dover International Speedway. The 15-year-old also competed in the ARCA Racing Series three times, making his series debut at Iowa Speedway finishing 10th and later topped that finish at Lucas Oil Raceway where he finished seventh.

“We are excited to add K&N, as well as ARCA to our organization in 2019,” said Mike Beam, President of GMS Racing. “Mayer is very talented at such a young age, and I see a big future for him in motorsports. I’m glad that he chose us to pursue his career in racing. Our goal has always been to build championship caliber teams no matter what series we participate in. With Mayer behind the wheel and Mardy Lindley leading the team, I do not doubt in my mind they will be successful in 2019.”

Mayer and the No. 21 team’s first race will be in the K&N Pro Series East event at Smyrna Speedway on February 10, 2019.

Sam Mayer’s racing career began at age four racing the Kid Karts at Badger Raceway. Now 15, he has already won a full slate of U.S. Legend Cars Series events and was the youngest driver to ever win a Late Model race at the historic Greenville Pickens Speedway. For the 2018 season, Sam raced with Dale Earnhardt Jr.’s JR Motorsports’ championship-winning Late Model program. He secured consistent top-five finishes, as well as took home his first CARS Tour victory during his first run at Wake County Speedway and the 2018 Bojangles Summer Shootout title at Charlotte Motor Speedway. Sam ended the 2018 season as the highest finishing rookie in the 2018 CARS Response Energy Tour Late Model championship standings. He will continue to compete in both the NASCAR K&N Pro Series and the ARCA Racing Series, in which he has already taken home two top-five and five top-10 finishes. To learn more about Sam or sponsorship opportunities, visit www.sammayerracing.com or follow his career on Twitter, Instagram and Facebook.

GMS Racing competes full-time in the NASCAR Camping World Truck Series with drivers Johnny Sauter, Sheldon Creed and in the NASCAR K&N Pro Series, as well as in the ARCA Racing Series with Sam Mayer. Since the team’s start in 2014, GMS Racing has grown to occupy several buildings located in Statesville, N.C. The campus also includes operations for GMS Fabrication. More information can be found at https://gmsracing.net/.