The Impact of Social Media on NASCAR and Other Sports 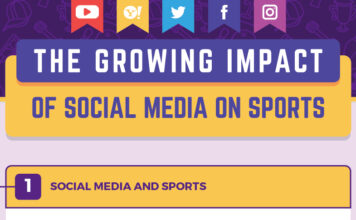 The way we watch and follow sports has changed significantly over the last several years. While TV stations, newspapers, and magazines represented the prime source of information in the past, the majority of sports fans now use the internet to get the latest news and results.

Stats found in the infographic below by BettingSites suggest that as much as 61% of people follow sports with the use of a computer or mobile device. This includes sports like basketball, sports, football, but also NASCAR. While NASCAR is still broadcasted on television, many races can be streamed on the web as well.

YouTube is very practical when it comes to game content. Highlights from certain events get uploaded only minutes after the game ends, and you will be able to watch them easily and on demand. NASCAR races, news, and interviews can be easily accessed through the official YouTube channel.

Another advantage of social media over other forms of media is the fact that the athletes themselves can reach out to people directly. Popular NASCAR driver Jimmie Johnson has over 3.5 million followers on Facebook and Twitter combined. Reporters and journalists have embraced these platforms as well since they are the most practical way to spread the news quickly.

The TV stations are really feeling the blow of the social media craze. Sports stations like ESPN and Sky Sports are annually losing hundreds of thousands of subscribers and are seeing revenue decreased measured in millions.

The main reason for this is that following sports on social media is much more practical than getting information through the TV. You get to pick what you want, and all you need is access to the internet. The number of fans who use mobile phones to follow NASCAR and other sporting events has risen by 18% from 2013 to 2016.

Social media is also an excellent way for companies to put their brands on display. Many well-known athletes like Cristiano Ronaldo and LeBron James have big sponsorship deals with Nike and are earning big cash through their social media posts. For each of their tweets, they get hundreds of thousands of dollars in return.

Using social media has made big money to clubs as well. It is estimated that popular soccer teams earn around $10 per follower. The two most popular teams in the world are Real Madrid and Barcelona, and they each have over 100 million followers on Facebook.

The impact of social media on sports could be best presented through exact numbers. Check out the neatly constructed infographic below which contains detailed information about this subject.