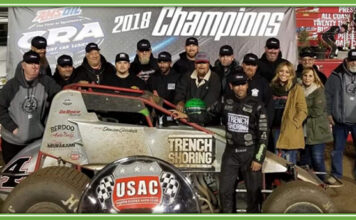 (Concord, CA, December 10, 2018) Likely future National Sprint Car Hall of Famers Damion Gardner and Mark Alexander added jewels to their already crowded racing belts when they combined to win the USAC/CRA Sprint Car Series championship for the sixth straight year. It was also the seventh title for each in the 15-year-old series. Prior to uniting with Alexander, Gardner won a USAC/CRA title driving for Ron Chaffin in 2005 and car owner Alexander did likewise with driver Tony Jones in 2007.

While winning the title six straight times makes it sound easy, it was anything but that in 2018. The season was filled with drama starting before the first green flag of the nine-month campaign all the way until the final checkered flag. Hard work by the entire team combined with the backing of some great, dedicated sponsors, resulted in another championship season.

Tension gripped the winter of 2017/18 for the famous silver and green #4. After winning a fifth straight title in 2017, the team’s main sponsor retired from the sport. For a while, it put them in peril as they sought out another corporate partner to help keep them at the top of their game and in the biggest casino in the world. Not long before the first race of the new campaign, longtime racing aficionado and historian Tom Malloy and his son Kevin from Trench Shoring came on board and became a major key to the team winning that sixth straight title.

After the first race of the year was rained out on March 3rd, the team immediately exhibited its championship form the following week by winning the first of its five main events at Arizona’s Canyon Speedway Park. They then won the Perris Auto Speedway season opener on April 21st. Gardner and crew chief Steve Alexander worked their incredible magic through the first eight races of the year with two wins, five top three finishes and seven top fives. The only time Gardner finished out of the top five in the first eight races was an eighth-place outing on Memorial Day weekend at Perris after coming from the back of the field due to a tangle.

The team returned to its winning ways at the prestigious Louie Vermeil Classic at the Calistoga Speedway during “California Sprint Week” on Labor Day weekend. It also ended up third overall in the six-race west coast mini-series. However, when the series ended on September 8th, the #4 crew was 51-points out of first place in the season long USAC/CRA championship standings and there were only nine races remaining. The team had its back against the wall, but not for one minute was there any doubt amongst the ranks that they would not get the job done. They knew there was no room for error and like a seasoned prized fighter, they had to rise to the occasion to maintain the championship crown.

In the next five-races, Gardner and his boys responded like true champions. They never finished worse than third and they posted wins at Perris and Arizona Speedway. By the time they headed back to Perris for the Oval Nationals, they had turned that 51-point deficit into a five-point advantage.

Things went well the first two nights of the Oval Nationals and Gardner continued to advance his lead. Heading into the final race of the season, a little better than a mid-pack advantage would sew up the historic sixth-straight crown. However, disaster struck on the last corner of the last lap of the “Super Six Dash” when Gardner flipped hard. Fortunately, he was okay, but the car was bent.

Back in the pits, the team had a decision to make and they had to make it in a hurry. Repair the damaged car or switch to a backup and start at the rear of the field. The crew decided to repair, and the thrash was on. With just seconds to spare, they rolled the car onto the grid and in a truly remarkable performance, the veteran driver steered the bent racecar to a fifth-place finish and the subsequent seventh championships for both he and car owner Mark Alexander.

In addition to the title, Gardner led the series with five wins, six fast times, 14 heat race wins and most feature laps led with 155.

In the 72-years since the inception of the original CRA series in 1946, two drivers are now tied at the top with seven championships to their names. One is National Sprint Car Hall of Famer Ron Shuman. The other is Damion Gardner. It is very possible Damion Gardner could stand alone at the top of that list with eight championships to his credit after the 2019 campaign.