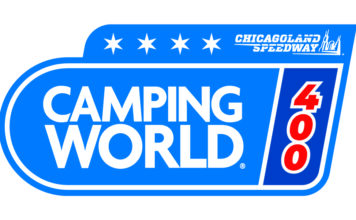 “It looked like after we had that last green flag cycle things were looking pretty good. We ran down the 42 and I thought if we could get by him we were catching the 88, together, both of us were. I just couldn’t get to his inside or outside and get a run. I would get right to him but not enough of a run to make a move. I just got tight at the end and he drove away at the end. We were pushing really hard on the front tires and eventually they are going to give out. Congrats to Alex, that is his first win and there is nothing like that. That is cool for that team but I don’t really care a whole lot about that. It is all about our car and we come home with a third out of the day, so we will take it.”

“That was a struggle all day. We couldn’t get a handle on it. We got our best at the end which is certainly what matters. A decent day. We will take it and learn from it and move on.”

WHAT WERE YOU MISSING? “Somewhere in the balance of speed and handling 1+1 didn’t equal 3. I am a little frustrated. I was hoping to be a little better than we were today.”

HOW DID YOU WORK YOUR WAY INTO THE TOP-FIVE AT THE END? “We dug really hard at the end. We had a good run at the end and made a lot of passes and made a lot of ground with some good strategy on pit road and good execution. It wasn’t quite enough speed to run with them. We had some real good glimpses of having what it takes but they were just glimpses, it wasn’t long enough.”

“Myself and two other cars blew tires at the same time early in the race and that stunk. We were running second and put a splash of gas in it to end the first stage. There were five or six guys doing that and the right rear started peeling apart and that pretty much ruined our day. We went a lap down and had to play catch-up all day. I think we gained seven seconds on the leader there during the last run, so today, the fastest car didn’t win the race.”