DiBenedetto reveals he is not returning to Leavine Family Racing 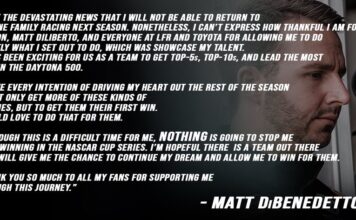 Matt DiBenedetto revealed Thursday on social media that he will not return to Leavine Family Racing for the 2020 Monster Energy NASCAR Cup Series season.

Four of DiBenedetto’s eight career top-10 finishes have come this season with LFR, including his only two top-five finishes in NASCAR’s premier series. The top fives came at Sonoma Raceway and New Hampshire Motor Speedway. Plus, he finished sixth at Watkins Glen International earlier this month.

Leavine Family Racing is affiliated with Joe Gibbs Racing, an alliance that began this season with LFR switching manufacturers to Toyota.