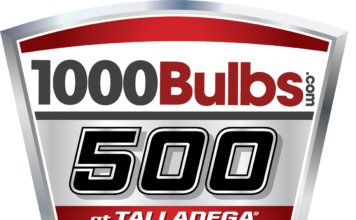 NBC will telecast the 1000Bulbs.com 500 at Talladega Superspeedway live at 2:00 p.m. ET Sunday, October 3. The NBC Sports Gold app will stream the race and live coverage can also be found on MRN and Sirius XM NASCAR Radio Channel 90.

CHASE ELLIOTT, NO. 9 NAPA NIGHT VISION CAMARO ZL1 – Pole Winner
“We had a really fast NAPA Night Vision Camaro there. It was really faster than I was expecting it to be today, which is nice. And, Alan (Gustafson, crew chief) and our team do such a good job at these places; really, Hendrick, as a whole, and our body shop and our engine shop doing the job that they do coming to these places and have fast race cars and really, it’s kind of on them. So, I’m really proud of the effort. It was a tough week last week, obviously, so it’s just nice to come back and get a pole. Obviously, it’s a long race and anything can happen. So, we’ve got to take advantage of a good pit pick and we’ll go to work from there and see what happens.”

HOW COMFORTING WILL IT BE AT LEAST EARLY ON, TO KNOW YOU’RE GOING TO BE SURROUNDED BY TEAMMATES TO START THIS ONE OFF?
“I’ve got three teammates behind you, but then not a lot of Chevrolets back behind that for a little while. So, there are a bunch of other guys stacked in between us. So, we’ll see. I’m sure these games will be played pretty early. And hopefully we can stay up front and grab some stage points and hopefully get a win.”

WILLIAM BYRON, NO. 24 AXALTA CAMARO ZL1 – Qualified 3rd
“We’ve had some great racing and really fast cars this year and that’s going to help our case tomorrow to keep our track position and get a good pit selection. So, I’m really excited about all that. You never know what can happen here, so we’re just going to try to work together and see what happens at the end of it.”

JIMMIE JOHNSON, NO. 48 ALLY CAMARO ZL1 – Qualified 4th
WHAT KIND OF RISK CAN YOU TAKE WITH BLOCKING AT THESE RACES?
“Blocking has just elevated over the years. One, it’s just tough to pass the leader. If you get up there and defend your position and hold it, I’ve seen guys that can stay there all day long. That’s the ultimate motivation that we all have. When you add stage racing and the time of the year it is, the blocking is going to be intense. There’s no way around it. At this track in the past, you could fall to the back, let the big one happen and then come through. Stage racing has changed that and certainly this rules package has too.”

IT’S BEEN MORE EVIDENT OF MANUFACTURERS WORKING TOGETHER? HOW DOES THAT PLAY FOR YOU?
“This time of the year is always a bit tricky for manufacturers, the teams and how you can help. I’ll be mindful and aware of it, but I’m here to win a race. My teammates wouldn’t expect me to do anything other than go out and win a race. There are decisions to be made on the course of the day. I think we are going to be better sticking together and try to make those decisions to keep the group unified.”

KYLE LARSON, NO. 42 MCDONALD’S CAMARO ZL1 – Qualified 12th
“It will be interesting to see how hard the guys below or around the cut off are racing. Thankfully for me, we don’t have to worry about that. But we still want to get a good finish and avoid the wrecks. We’ll see how it goes tomorrow, but it’s always wild.”

IS IT COMFORTING KNOWING YOU’VE ADVANCED TO THE NEXT ROUND?
“Yeah, I mean I don’t think I’ll do anything differently than I normally would at either race track. I just want to have a good run, continue our consistent finishes and try to rack up some more points too. I feel good about next week for sure.”

AUSTIN DILLON, NO. 3 AMERICAN ETHANOL / RCR 50TH CAMARO ZL1 – Qualified 20th
“You can give up some at certain times of the race, but if it’s a last lap situation, you are going to be held accountable for the actions you make and you’re going to feel bad if you go home not making the block that could win you the race or you’re going to feel bad if you’re wrecked. It’s one of those things. I’ve been on both sides of it; I’ve been on the winning side of it, I’ve been on the losing side of it. It’s speedway racing, that’s all I have to say about it. It’s tough to balance and you just hope you’re in the right place at the right time, and that you’re fast enough you don’t have to worry about it.”

CHRIS BUESCHER, NO. 37 LOUISIANA HOT SAUCE CAMARO ZL1 – Qualified 23rd
YOU’RE LOOKING FOR YOUR FIRST WIN OF THE SEASON, BUT THERE ARE SOME GUYS IN YOUR SAME CAMP THAT ARE PLAYOFF DRIVERS. WHAT ARE THE INSTRUCTIONS OR CAN YOU DO WHAT YOU WANT TO DO?
“I don’t think you have to do anything in particular. As a group, we are asked to try and be aware of everyone’s situation, more specifically the three Chevy cars that are in the Playoffs that are not locked in at this point. I think the understanding is to help a Chevy before you help a Toyota or Ford. Never do anything that will hurt you, but if you can help someone without hurting yourself, definitely help a teammate.”

KURT BUSCH, NO. 1 MONSTER ENERGY CAMARO ZL1 – Qualified 24th
“We just haven’t quite had the speed by ourselves right now, but in the draft, our 20-lap run we did with the other Chevrolet’s went well. We’ll see where qualifying stacks up. Again, it’s a matter of executing as a team. Sometimes the crew chief will say we’re going to come in and do four tires and at the last second, they’ll change it to two. Everything is ramped up right now. We’re just trying to execute as a group and get as many Playoff points as we can.”

BUBBA WALLACE, NO. 43 VICTORY JUNCTION CAMARO ZL1 – Qualified 27th
WHAT IS THE LINE BETWEEN BEING AGGRESSIVE AND NOT PUTTING YOURSELF IN BAD SITUATIONS?
“Yeah, I’m going to hang out in the back, probably in the second pack. I tore up three race cars this year. It’s hard to do that for sure. It’s tough to stay out of the mess, there’s not really any safe spots. We’ll just hang out, be careful tomorrow, survive and try to be there with around seven laps to go. Our speedway cars have always been really good, so we have a good opportunity tomorrow. We just have to be there at the end and continue to capitalize on it.”

DANIEL HEMRIC, NO. 8 LIBERTY NATIONAL / RCR 50TH CAMARO ZL1 – Qualified 29th
“I’ve had really fast cars here at superspeedway racing. RCR does a really good job of that. I just haven’t had a lot of speed since we unloaded. The speed we’ve had, they don’t necessarily drive like you want them to in the race, so hopefully this is a good omen for the other side and we’ll be able to be aggressive and do what we need to do come Sunday.”

RYAN PREECE, NO. 47 KROGER CAMARO ZL1 – Qualified 30th
HAS THERE BEEN ANY IMPUT ON WHO YOUR NEW TEAMMATE WILL BE?
“I told them that they are really smart with everything they do and obviously they will do whatever is best for the organization and whoever they feel will bring something as far knowledge, experience or whatever it may be. I feel confident with whoever it will be. Whoever it is, I’m sure it’s going to be a good fit.”

YOU FINISHED THIRD HERE IN THE SPRING. CAN YOU COME CLOSE TO REPEATING THAT?
“I think superspeedway racing is very situational. A lot of luck comes from positioning and being in the right place at the right time. So, I think at the end of the day, our car was driving pretty good yesterday. I feel pretty solid about it.”