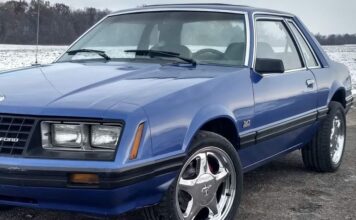 The Stephen Cox Blog is presented by “Porsche Legend: The Penske L&M Porsche That Made Racing History”

You know, if Fox body Mustangs keep soaring in value I may have to rename this series of articles. And that would be a good thing.

My 1980 base model Mustang was originally equipped with a 2.3 liter, four cylinder engine, manual four-speed transmission, 13-inch wheels and a 7.5-inch rear end with a 2:73 open differential. Not exactly a performance monster, but in its defense, the car has traveled over a quarter of a million miles with nary a complaint and has been perhaps the most reliable vehicle I’ve ever owned.

Our rebuilding project began with the installation of a 347 Windsor small block stroker engine from McGunegill Engine Performance in Muncie, Indiana. The transmission was upgraded to a 5-speed Tremec manual.

The next major phase of the car’s rebuild is now complete with a little help from my friends at Late Model Restoration (LMR). I was having a hard time choosing between the TRX wheels commonly used on the early, performance-oriented Foxes and the later Pony wheels. But once we made the decision to upgrade to five-lug wheels, the rest was academic. TRX wheels are not available in the five-lug format, so I opted for LMR’s gorgeous chrome Ponies. Now that I see them on the car, I’m glad I chose them. They look incredible.

Additionally, the entire rear axle assembly was upgraded to a 9-inch Ford GT unit with 3:73 gears. The new 17-inch Pony wheels are huge compared to the stock 13’s, and somewhat larger than the 15-inch, four-lug Anson slots that had been on the car for the last decade. New Continental Extreme Contact performance tires were mounted. The entire stock brake system was upgraded with Late Model Restoration’s disc brake conversion kit. Essentially, my Mustang now has the brake system of a 2000 Mustang GT.

Although I’ve not yet conducted any acceleration tests, the performance and handling of the car has changed dramatically after the completion of this most recent phase. The 3:73 rear end is the most noticeable change. First gear launches like a rocket and demands an almost instant shift into second. Every gear now feels like a performance gear… even overdrive (fifth). I don’t need to downshift to pass anyone. I can stay in fifth and zoom from 55 mph to 80 in a flash. It’s scary fast. Perhaps the 3:73 is actually a bit too much gear. After driving about 200 miles I’m still undecided.

The new four-wheel disc brake system is outstanding, and a genuine necessity on a 400+ horsepower car. The brake pedal has superb feel and gives the driver great confidence. Track testing is yet to come, but these brakes are more than enough for street use. And remember, this 1980 Mustang weighs some 500 pounds less than the 2000 GT model for which this brake system was designed. That’s a huge advantage. I anticipate the brakes holding up pretty well under road course conditions.

An untimely December snow in central Indiana made photos a bit challenging, but I did the best I could under the circumstances. The next phase of our rebuild will include a complete suspension overhaul, including subframe connectors and lowering springs.

This is turning into a really fun car. Ford should have built it this way from the beginning.