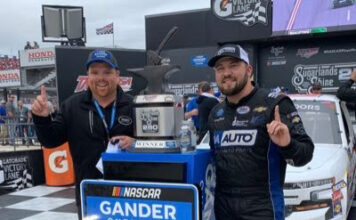 Mooresville, N.C. (January 31, 2020) Driver Spencer Boyd and Team Principal Tyler Young are proud to jointly announce the return of Boyd to the No. 20 Chevrolet Silverado. In their second season together, the team plans to build on the NASCAR Gander RV & Outdoors Truck Series win at Talladega Superspeedway in 2019.

Spencer Boyd remarked on his return to Young’s Motorsports, “We have so much more to do together. It’s a family team that has done amazing things since coming into the sport in 2012; I’m honored to still be a part of this family. Last season marked a huge first for me as a driver and Young’s as an organization with our win at Talladega so we want to build on that. Tyler and I spent a lot of time in the offseason working on how we can get better as a team and now it’s time to put those ideas together on and off the track.”

This is Spencer Boyd’s fifth season in NASCAR competition amassing 68 national touring series starts with one win and two top ten finishes. In addition to his first win, Boyd made his NASCAR Cup Series debut in 2019.

“What can I say about Spencer Boyd?” asked Team Principal Tyler Young. “I’m reminded every day what he means to our team because I walk by that confetti covered truck and get motivated to further develop our program. We have much more to accomplish together.”

Young’s Motorsports has 231 races to their credit with 23 top ten finishes all in the NASCAR Gander RV & Outdoors Truck Series.

“I’m motivated by the recent announcement of our playoffs expanding to ten drivers,” said Boyd. “We grew so much last year so there is a new set of goals this year. Plain and simple, I’m eager to get the season started and I’m not going to lie, I like that I won’t have those yellow stripes on the rear bumper for the first time in my career.”

The crew chief and partnership lineup for the No. 20 truck will be announced soon.