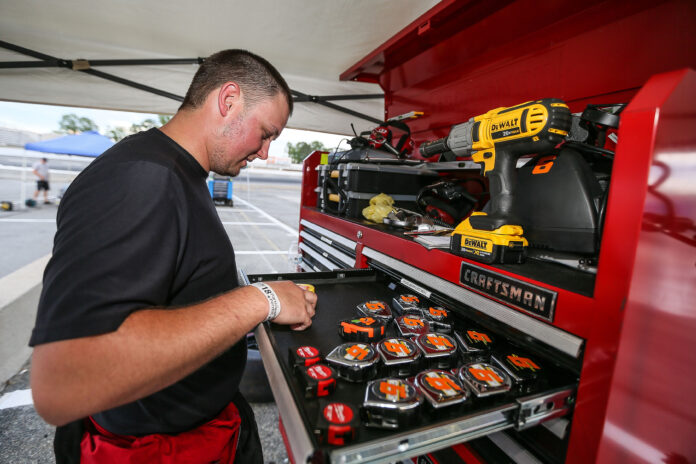 South Boston, Va…..Brent Younger is like many other drivers, wishing he could be racing at South Boston Speedway and contending for wins, top-five finishes and a division championship.

Instead, he has had to settle for a couple of test sessions this summer at “America’s Hometown Track.”

This season marks the third season for the South Boston, Virginia driver who competes in South Boston Speedway’s Limited Sportsman Division. He competed in two races in 2018 and competed in most of the track’s events in 2019.

Younger finished eighth in the 2019 Limited Sportsman Division point standings at South Boston Speedway with one Top-Five finish and 10 Top 10 finishes. He bought a newer, better car during the off-season, looking to further improve in 2020.

“We’ve definitely made some improvements getting this car,” Younger said during a break in a test session at South Boston Speedway.

Younger’s journey on the path of improvement is one of taking gradual steps.

“We’re getting a little better as we go, and I feel like we’re headed in the right direction to have a good piece here and something to work with,” continued Younger.

“I guess some of the bigger teams spend what they need to spend and are able to get all of the right tools there at the get-go. We have to take things a little slower and take one step at a time to get what we need at the track.”

Younger would rather be racing, but he has found positives in his test sessions at South Boston Speedway this summer.

“Anytime you can come over here and put laps on the car you get better,” Younger said.

“But, it’s hard to simulate a real race. In a real race you put yourself through those paces and I think you would probably have a better idea of where you are if you are able to be on the track driving in real races.”

The South Boston, Virginia resident says it is hard not being able to race.

“The biggest thing is you just don’t know what to expect because everything is so fluid with the COVID-19 situation,” noted Younger.

“It’s hard to plan. If we knew we were going racing in September or October, we would have something to plan toward and it would be easier. It’s harder not knowing.”

South Boston Speedway is open Monday through Thursday from 9 a.m. to 5 p.m. and is open for testing. Teams interested in scheduling a test date should contact the speedway office at 434-572-4947.