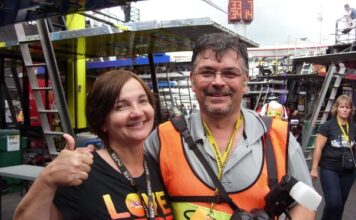 Speedway Media (SM) is saddened by the loss of one of our founding members, Ed Coombs. Ed was instrumental in the early stages of SM for gathering and developing the resources, relationships, and respect among the NASCAR community. He fought hard every day to make online coverage recognized and respected during times in the early 2000s when online coverage was not. Ed’s hard work eventually paid off and SM and many other outlets have him, in part, to thank.

Ed loved photography and NASCAR was a part of it. You can view some of Ed’s great shots that span over two decades on our photography page here.

Along with photography Ed also contributed his thoughts throughout the season. His weekend stories and opinions can be viewed here.

Ed helped out as an editor and publisher when needed, but he was our credential guy for 20 years. If you ever needed an opinion or just a straight answer, Ed was the guy. His support, advice, and encouragement were integral to the success of Speedway Media. Ed, you will be greatly missed.

Sending our heartfelt condolences out to the entire Coombs family during this time. Ed, we will never forget you, RIP my friend.

The funeral and memorial details have not been finalized at the time of this post. We will update the arrangements when they become available.