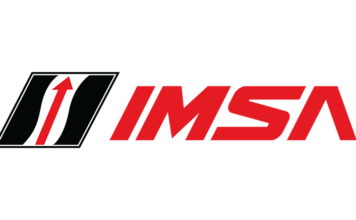 After qualifying seventh on Sunday morning, Ryan Briscoe took the green flag at the picturesque road course for the penultimate race of the 2020 season. With decisive moves in the opening stages of the two-hour, 40-minute race, Briscoe moved up to fifth with half an hour complete. Deploying a similar strategy to the Petit Le Mans two weeks ago, the Cadillac-powered team stretched its first stint to open up strategic possibilities, moving them into the lead of the race.

At the 40-minute mark, Briscoe brought the black and blue Konica Minolta machine to pit lane for the team’s first pit stop and driver change of the day. With the pit cycles out of the way, Renger van der Zande rejoined the track in sixth place, working to maximize the alternate strategy. Gaining time throughout his first stint in the car, van der Zande made a decisive move to take fifth place with one-hour, 35 minutes remaining. Mirroring the strategy from the first stint, van der Zande took the lead prior to pitting for tires and fuel with an hour and 17 minutes remaining.

With van der Zande remaining in the car for last two stints of the race, the Dutchman was able to cycle up to the third position during the final round of pit stops, rejoining in sixth with 41 minutes remaining for the sprint to the end and turning the fastest lap of the race. A full course caution for debris added some drama into the mix with 24 minutes left on the clock. Ever the opportunist, van der Zande was able to make his way briefly into the fifth position at the re-start, before having to settle for the sixth position come the checkered flag.

With the final sprint race of the 2020 IMSA WeatherTech SportsCar Championship complete, the No. 10 Konica Minolta Cadillac team heads to the season finale at Sebring International Raceway second in the championship standings, two points off the lead and with everything to play for.

“We struggled all weekend which is not normal,” said team owner Wayne Taylor. “We seemed to have had some brake issue during the race. After the yellow we thought we were going to have a good chance to get some good points. We were able to get up to fourth, but we had the same electrical issue that we had at petit le mans. We had rewired the car on Friday, so there must be something going on. It might be engine related, so everyone will do their job before we go to Sebring 12 Hour. The championship is not over, we’re only two points behind. Clearly, we didn’t have the pace this weekend. It’ll now be a shootout at Sebring in two weeks for the 12 Hours.”

The 2020 IMSA WeatherTech SportsCar Championship will be decided in just two weeks with the 12 Hours of Sebring on November 14. The race will see newly crowned NTT IndyCar Series Champion Scott Dixon rejoin the team, alongside Renger van der Zande and Ryan Briscoe. The 12-hour classic will be broadcast live on TrackPass on NBC Sports Gold at 10:05 a.m. ET on Saturday, November 14th.
RENGER VAN DER ZANDE, No. 10 Konica Minolta Cadillac DPi-V.R
“Today we had some great pace in the car, then we had no pace in one of the stints and we don’t know why. I think Ryan did a good job in the beginning and we were moving forward. The pit stops were good, I just had no grip in the middle stint, and we lost a lot of time there. Then on the restart I made a move to get up to fifth position. At least we were in the fight to move forward, but it’s the worst-case scenario for the championship. The Acuras have been on a streak for so long now. After the gremlins we had in the last stint we cruised home and now we have to figure out how to fix it and now we only have one shot at Sebring to clinch the championship.”

RYAN BRISCOE, No. 10 Konica Minolta Cadillac DPi-V.R
“Tough race, but at the same time I’m happy to have finished. We had some electrical issues again this race that have been haunting us the last couple of rounds. It was pretty scary because the car shut off a couple times and had to reset the dash with Renger in the car. He did a good job on the last restart and moved us up to fifth and the car started having problems. Thankfully we were able to build up a lap over the other Cadillacs and we were able to bring it home in sixth, but it’s a pretty disappointing result today.”

About Konica Minolta
Konica Minolta Business Solutions U.S.A., Inc. is reshaping and revolutionizing the Workplace of the Future™ with its expansive smart office product portfolio from IT Services (All Covered), ECM, Managed Print Services and industrial and commercial print solutions. Konica Minolta has been recognized as the #1 Brand for Customer Loyalty in the MFP Office Copier Market by Brand Keys for twelve consecutive years, and is proud to be ranked on the Forbes 2017 America’s Best Employers list. The World Technology Awards recently named the company a finalist in the IT Software category. Konica Minolta, Inc. has been named to the Dow Jones Sustainability World Index for eight consecutive years. It partners with its clients to give shape to ideas and work to bring value to our society. For more information, please visit us online and follow Konica Minolta on Facebook, YouTube, Linked In and Twitter. Konica Minolta, as title sponsor, highlights Wayne Taylor Racing’s existing lineup of partners that also features Cadillac V-Performance Racing, AMETEK Electronic Systems Protection (ESP /SurgeX) and Powervar, and CIT.