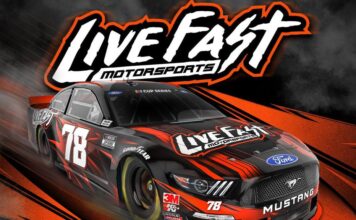 When in October 2019, Matt Tifft collapsed with a seizure at Martinsville, many thought this was the end of his NASCAR career.

This was not what Matt Tifft thought.

Instead, the 24-year-old will become the youngest team owner in the Cup Series. The new Live Fast Motorsports team will be jointly owned by Tifft and his friend and mentor B.J. McLeod.

When Go Fas Racing team owner Archie St. Hilaire decided to reduce his schedule to just six races, placing his full-time ownership charter on the open market, Tifft and McLeod purchased the charter and the resulting organization has been christened Live Fast Motorsports.

The new NASCAR Cup Series entry in the No. 78 Live Fast Motorsports Ford Mustang was unveiled Friday by the pair. The team will be based in Mooresville and operate with a partnership with Stewart-Haas Racing.

Live Fast Motorsports has entered this strategic partnership with Stewart-Haas Racing, a 10-time Cup Series winning organization in 2020, “to assist the team in the competition and navigate the difficulties of developing a successful NASCAR Cup team.”

“Live Fast Motorsports is excited to be joining an incredible group of owners, as well as the new teams and ownership coming into the sport,” the release stated. “ Live Fast Motorsports and its partners are ready to take on the challenge to grow and develop as a team.”

First of all, NASCAR is a TEAM sport consisting of all of the amazing people who work behind the scenes to support the driver and help him win. And, also one of the most popular sports to bet on. Among other sports, on sites like sbo.net, you can wager on a NASCAR driver or a team as a whole, check their performance, and if they seem to win a race or series, it can be quite good. In regards to this, we are eager to see how McLeod & Tift’s Live Fast Motorsports team will perform in the upcoming 2021 season.

The two first met when Tifft was 12 and participating in a driving school in Florida.

“I’ve been with him since the Late Model days,” Tifft said about his new business partner and old friend.

“I was his first Truck Series driver at Martinsville and getting a top-10 there with him really launched my career. He was a groomsman at my wedding, so we’ve been together for a long time. When we were racing, he was my Friday night movie buddy.”

McLeod also has nothing but good things to say about his friend and their new partnership.

“Matt is going to make me stronger. He’s got some really good qualities about him that I’m excited about helping some of the weaknesses that I might have and just what we can do together.”

“It’s literally decades of dreaming, decades of work, decades of being focused, just a lot of relationships being built to get us to this point,” McLeod said.

Although he is still not completely sure that his driving career is over, Tifft is entering his new NASCAR role after much thought and questioning.

“I went through several months there, where first, I was dealing with the health problems and second, a dark space because I worked my entire life to get (to the Cup Series) and all of a sudden, that was gone.”

“I explored all kinds of avenues, whether that was being involved from a PR standpoint or sponsor standpoint,” Tifft said. “I looked at some driver coaching stuff. I couldn’t drive, so when you spend your entire life being a driver, it’s pretty hard.

But this is not the first time he is facing such a big challenge, also involving health problems. In 2016 he was diagnosed with a brain tumor. This required surgery and caused him to miss time. But Tifft was far from giving up – that season he was a part-time Xfinity Series driver, and he returned to active competition 11 weeks later!

He already operates a multi-car team in the Xfinity Series and has served as a driver-owner in the Truck Series in addition to owning Super Late Model. One of the most respected individuals in NASCAR, he is also an unusual owner in the Cup Series: He usually sports slicked-back jet-black hair, often held in place by a backward Hurley baseball cap, and completed with his signature Affliction shirt.

“My new dream is to be a Childress, a Gibbs, a Hendrick, or whoever,” McLeod said