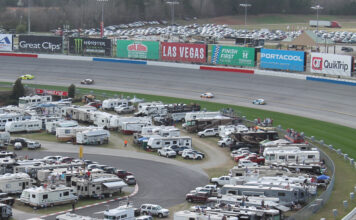 HAMPTON, Ga. (Jan. 28, 2021) – Infield campers will be welcomed back to Atlanta Motor Speedway during the Folds of Honor QuikTrip 500 NASCAR weekend March 20-21.

In collaboration with NASCAR, AMS has worked diligently to develop an infield camping policy that prioritizes the safety of fans, event staff, and NASCAR industry members. As a result, the Flock Brothers campground located inside turns 1 and 2 of the 1.54-mile oval will host a limited number of campers during the March NASCAR weekend. The remainder of the infield will be utilized by the NASCAR industry and event staff.

“For months fans have made their voices heard and told us they want the opportunity to camp in the infield this spring,” said AMS Executive Vice President and General Manager Brandon Hutchison. “I’m proud of our team’s efforts to make it happen and I can’t wait to see our fans in the infield and in the grandstands during the races.”

The infield camping plan also calls for all campers to be backed into their spaces. This, in conjunction with the roomier camping spots that resulted from Atlanta Motor Speedway’s 20 in 20 initiative, will ensure proper distance is available between attendees.

Infield and exterior camping will be available for RVs and campers with self-contained restrooms only during the Folds of Honor QuikTrip 500 weekend. Atlanta Motor Speedway’s showerhouses and restrooms in its campgrounds will not be open on race weekend and as a result tent camping will not be permitted.

Availability for infield camping is limited and priority will be given to fans who placed a camping deposit. Fans interested in camping during race weekend should call 877-9-AMS-TIX or visit www.atlantamotorspeedway.com.

About the Folds of Honor QuikTrip 500 weekend:

The annual 500-mile race showcases some of the fastest and most thrilling action NASCAR has to offer. This storied race also brings awareness to Folds of Honor and its mission to help families of military servicemen and women who have fallen or been disabled while on active duty in the United States Armed Forces.

The race weekend also features Atlanta’s same-day NASCAR doubleheader on Saturday, March 20, which has been part of the spring NASCAR weekend since 2015. The thrills of the NASCAR Camping World Truck Series 200-mile race and the EchoPark 250 Xfinity Series race all happen in one action-packed day that race fans look forward to every year.

More information on the March 20-21, 2021 Folds of Honor QuikTrip 500 weekend and ticket availability can be found online at AtlantaMotorSpeedway.com or by calling 877-9-AMS-TIX.

About the Quaker State 400 Presented by Walmart:

New for 2021 the Quaker State 400 Presented by Walmart headlines the summer slate of NASCAR racing at Atlanta Motor Speedway.

The Quaker State 400 Presented by Walmart will be the first NASCAR Cup Series race held at Atlanta Motor Speedway in the month of July since 1974. The 400-mile race is sure to be one of the most challenging races of the summer for NASCAR’s best.

Accompanying the Quaker State 400 Presented by Walmart is the NASCAR Xfinity Series on Saturday, July 10. The summer race will challenge the rising stars of the sport to stand out and succeed on one of the circuit’s most challenging tracks.

More information on the July 10-11, 2021 Quaker State 400 Presented by Walmart and ticket availability can be found online at AtlantaMotorSpeedway.com or by calling 877-9-AMS-TIX.