DOGECOIN BETS WITH SPRINGRATES ON PARSONS IN VEGAS 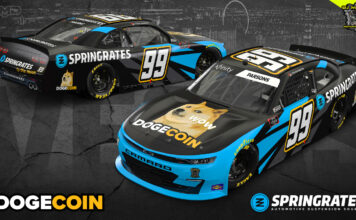 Sean Taylor, founder and CEO of Springrates immediately saw a significant and relevant opportunity to bring back Dogecoin in NASCAR, as popularity and traction has increased on social media platforms through significant figures positively acknowledging cryptocurrency, such as Elon Musk.

“Lately, I have been obsessed with learning more about blockchain and the future of decentralized currency. I had the idea of including Dogecoin on the car for this race while chatting with Stefan following the season opener in Daytona,” said Taylor. “It was ironic because at the time, I wasn’t aware his dad’s team previously ran the Dogecoin car in 2014. Maybe it was fate.”

Fate it was. Although this will be the cryptocurrency’s debut in the NXS, it will not be the first time that Dogecoin has adorned a race car in NASCAR. In 2014, an online Dogecoin community on Reddit brought attention to the lack of sponsorship for Josh Wise, who at the time drove for Phil Parsons Racing then in the No. 98 Sprint Cup Series. Within a week, over 55K in funds were produced for Wise to be sponsored by Dogecoin for the Aaron’s 499 race in Talladega. After earning his second-best finish in the Dogecoin car, Wise announced that if he was able to win the Sprint Showdown or win the fan vote, requiring him to defeat Danica Patrick, he would run the ‘Moonrocket’ car for free at the 2014 All-Star Race. After Wise won the fan vote and was in the All-Star Race, it was clear that the Dogecoin community has a NASCAR interest.

“Dogecoin has such a great community and there is so much interest surrounding it. I’m drawn to it because it’s affordable, gaining a lot of traction, and has endless potential. Plus, who doesn’t love memes?” Taylor added.

“Having the opportunity to run a scheme that has an incredible story from my Dad’s race team is something I am so proud to do. When Josh ran the Dogecoin car in 2014, I was much younger and remember being so excited at the fact that the Dogecoin community and Reddit came together to make it happen. At the time, I also wished it were me in the seat. So, to have the chance for Dogecoin to ride along with Sean and me in Las Vegas is a dream come true,” Parsons added.

In 17 starts in the NXS, Parsons has an average start of 26.9 and an average finish of 22. His best finish of the 2021 season was at Daytona International Speedway, where he finished in the 13th position after racing his way up and avoiding on-track incidents.

Springrates was founded in 2005 to provide the automotive tuning industry with a trustworthy company that specializes in high performance suspension including aftermarket coilovers, lowering springs, air ride, sway bars and more. To learn more about Springrates visit www.springrates.com or via social media on   Facebook, Instagram  and Twitter.