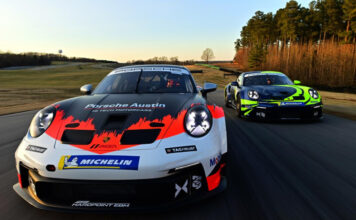 DANVILLE, Virginia (March 8, 2021) – Team Hardpoint EBM enters its inaugural season in the 2021 Porsche Carrera Cup North America with a pair of championship contenders in both the Pro and the Pro-Am classes. Riley Dickinson will pilot the No. 53 Porsche Austin/Team Hardpoint EBM Porsche 911 GT3 Cup in the Pro Class and Efrin Castro competing in the Pro-Am Class behind the wheel of the No. 65 Fine Fare Supermarkets/GoDominicanRepublic.com Porsche 911 GT3 Cup.

“This is yet another exciting chapter for Team Hardpoint EBM and we’re ready to get started,” Ferriol said. “Riley and Efrin are both talented drivers but also good guys, which is important to our culture as we develop Team Hardpoint EBM. Porsche’s single make series is where I got my start, and was important to Will and Earl as they formed Earl Bamber Motorsport. With their knowledge and our drivers, we have high hopes for the season.”

Dickinson, 18-years-old, is a five-time race winner in the Platinum Class Porsche GT3 Cup Challenge USA. The young driver, who was also the 2020 Hurley Haywood Scholarship award winner, finished third in the season-long championship as a rookie in 2019 and was the runner-up a season ago. Dickinson will participate in the Porsche Junior Program North America for up-and-coming drivers under the age of 24 competing in the Porsche Carrera Cup North America championship.

“This is going to be an exciting year for Porsche in North America, and I’m excited to be a part of it with Team Hardpoint EBM,” Dickinson said. “Not only does the North American market have its first ever Carrera Cup, but we also have the opportunity to showcase the all-new Porsche 992 GT3 Cup Car. As a Texas native who lives in close proximity to Austin, I’m really proud to have Porsche Austin as a partner this season. Having a Texas-based Porsche dealership involved with the first ever Carrera Cup North America is something that is a perfect fit. I can’t thank everyone enough at Porsche Austin for their support. It truly means a lot and I’m looking forward to having a great year with them on the car.”

Castro finished as the runner-up in the Gold Cup class for previous generation cars in 2020. The Dominican Republic-born driver just missed out on the Championship, earning six class wins and 15 podium finishes in the 16-race season.

“I’m looking forward to the Porsche Carrera Cup North America season with Team Hardpoint EBM,” Castro said. “Last year was successful for me as a driver, but this season is going to be even more challenging. To get to work with Team Hardpoint EBM and the crew, have a great driver like Riley as my teammate, and represent my home in the Dominican Republic through GoDominicanRepublic.com and Fine Fare Supermarkets is so much fun. I’m ready to start this season.”

Porsche Carrera Cup is one of the preeminent one-make racing series in the world, due in no small part to the emphasis placed squarely on the driver’s skill. Every single car competing in Porsche Carrera Cup is an identical Porsche 911 GT3 Cup car. The 2021 championship consists of 16 races at race tracks spanning the United States and Canada. The season-opening doubleheader takes place at Sebring International Raceway, March 17-19.

About Team Hardpoint EBM:
Hardpoint Motorsports was founded by Rob Ferriol in 2018 with the vision of combining his experience as a successful entrepreneur with his passion for racing. Team Hardpoint EBM is a joint venture between Team Hardpoint and Earl Bamber Motorsport formed in late 2020 to combine the resources of EBM and co-owners Earl Bamber and Will Bamber and the early success of Team Hardpoint. Headquartered at VIRginia International Raceway, the team’s 2021 plans include a full-season effort in the IMSA WeatherTech Sports Car Championship in a Porsche 911 GT3 R and a multi-car effort in the IMSA Porsche Carrera Cup North America. More information on Team Hardpoint EBM can be found at www.hardpoint.com or through its strong social media presence on Facebook, Instagram and Twitter.