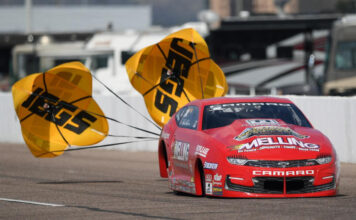 For John Force Racing, which sat out nine of the 11 Fuel races in 2020 primarily because of the economic effects of the COVID-19 pandemic, the 52nd Amalie Motor Oil Gatornationals this weekend at Gainesville Raceway in Florida is a highly anticipated re-emergence of competitors with 20 NHRA titles between the team namesake, daughter Brittany Force and Robert Hight.

“I’m going to fight to win another championship; so is Robert and so is Brittany,” said John Force, who enters the race with 16 Funny Car titles, 151 victories and a slew of other records. “We’re all going to be ready.”

It didn’t take long for Force, who will be behind the wheel of the PEAK/BlueDEF PLATINUM Chevrolet Camaro SS, and Hight, driving the familiar Auto Club of Southern California Camaro SS, to get race ready. Both registered blazing elapsed times and speeds in testing last week in Florida.
Styling cue updates and aerodynamic improvements based on wind tunnel testing that Chevrolet engineers and design staff worked on in late 2019 have been incorporated in the Funny Car bodies.

“John and I were going to be running the new 2020 Camaros all of last year and I only got to do that at Pomona and Phoenix,” Hight said. “John had a brand-new car going to Gainesville but never got to drive it, so we just barely scratched the surface with how good they can be. I believe we’ll have them dialed in and ready to go.”

Added Force, who will seek his ninth Gatornationals title in his 200th race day start in a Chevrolet: “The new Chevrolet Funny Car is so awesome. It will stick to the ground yet it’s slippery.”

Hight is a four-time winner at the track, including in 2019 on the way to his third Funny Car championship.

Teammate Brittany Force, who rocketed to the top of the Top Fuel chart in qualifications in both NHRA events she competed in 2020, is looking forward to continued success in the Monster Energy Chevrolet dragster.

Force recorded her first Top Fuel victory at Gainesville Raceway in 2016 and celebrated with Hight in the winner’s circle for John Force Racing’s first event double victory. In March 2019, she reset the track Top Fuel elapsed time record of 3.680 seconds on her way to becoming the first woman in 40 years to qualify in the top spot in the event.

Enders seeks to make more history
Erica Enders, driving the Melling Performance/Elite Motorsports Chevrolet Camaro SS, in 2020 earned her second consecutive NHRA Pro Stock championship and fourth overall in a Chevrolet to break a tie with Shirley Muldowney and Angelle Sampey for the most by a female.

“Being able to make that history meant a lot,” said Enders, who won four of the 10 events and posted a 25-6 elimination round record during the truncated season. “There’s not any reason we can’t keep winning and hopefully contend for our fifth championship.”

Enders, who will be competing in her 299th career Pro Stock event, will aim to surpass 350 round wins. She prepped for the opener with a semifinal appearance in the CTECH World Doorslammer Nationals presented by JEGS last weekend in Orlando, Florida.

“The mindset is the same for me,” Enders said. “Whether it’s testing or racing for a championship, your mindset can’t change. You want to go out there and win. Hopefully, we can go out there and have a great performance this year.”

Anderson will seek to qualify for his record-extending 400th consecutive race. The streak began at Pomona in 2002 for the four-time champion, who turns 60 on race day.

Second-generation drivers Aaron Stanfield, Mason McGaha, Kyle Koretsky and Troy Coughlin Jr. will present immediate challenges and represent the future of the class in their Camaros.

Stanfield, of Bossier City, Louisiana, the 2020 SAMTECH.edu Factory Stock Showdown champion in his Chevrolet COPO Camaro, heads the field in the first event of the eight-race series. Stanfield, 25, won five of the six races last season.

Points scored by drivers of the Camaro SS and COPO Camaro throughout the professional and Sportsman campaigns will contribute to Chevrolet’s goal of a record-extending 26th NHRA Manufacturer Championship.

FS1 will telecast eliminations at 11 a.m. ET. FOX picks up the action at noon.

BRITTANY FORCE, JOHN FORCE RACING, MONSTER ENERGY CHEVROLET DRAGSTER (2017 class champion; No. 1 qualifier in both races she competed in 2020; 2016 winner at track; holds Top Fuel track elapsed time record): “This Monster Energy team is ready to get to Gainesville. It’s a special place for me but it’s special this year because we’ve been gone so long. I’m excited to see what we can do this weekend. We’ll be coming out swinging right out of the gate looking for our first win at the first race of the season.”

JOHN FORCE, JOHN FORCE RACING, PEAK/BLUEDEF PLATINUM CHEVROLET CAMARO SS (eight-time winner at track): “We’re ready for this weekend, ready to get the NHRA Camping World Series season started. Testing went well, we were quick and fast and the new guys are figuring it out. I’ve got confidence in my crew chiefs, Danny Hood and Tim Fabrisi, and we’re all just excited to be back racing.”

ROBERT HIGHT, JOHN FORCE RACING, AUTO CLUB OF SOUTHERN CALIFORNIA CHEVROLET CAMARO SS (2019 champion; four-time winner at track; holds Funny Car track elapsed time and speed records): “Gainesville has been really good to this Auto Club team. We missed racing here in 2020 but the last memories we have are of picking up that win at the 50th anniversary of the event. We’re ready to build on that. In 2019, we won the championship and usually had the quicker car. We’re definitely excited about the new body, especially getting back to the racetrack. It’s been way too long. This is a big race, it always is, this year it’s even bigger because it’s opening up the season. Coming off testing, we’re ready.”

ERICA ENDERS, ELITE MOTORSPORTS, MELLING PERFORMANCE/ELITE MOTORSPORTS CHEVROLET CAMARO SS (four-time class champion): “I feel like after we won the fourth and I was able to become the winningest female, being able to make that history meant a lot. But as long as we’re racing, there’s not any reason we can’t keep winning and hopefully contend for our fifth championship.”

GREG ANDERSON, KB RACING CHEVROLET CAMARO SS (four-time winner at track; four-time class champion): “(The CTECH World Doorslammer Nationals presented by JEGS) was a chance to assess how our new setup was going to work. Jason (Line) was there to tune the race cars and basically he had a lot more time to look things over. My car ran really great and should have won. Made a small mistake in the semifinals with tire shake, but really happy with how the (KB Racing) cars ran all weekend. I’m expecting we’ll go to Gainesville and compete for the win with several of our team cars (Anderson, Kyle Koretsky, Dallas Glenn and Deric Kramer and Matt Hartford as engine rental customers).”

CHRIS MCGAHA, HARLOW SAMMONS RACING, HARLOW SAMMONS OF ODESSA CHEVROLET CAMARO SS (competing in 169th Pro Stock race; quarterfinalist at Gainesville in 2020): “It feels weird being at the racetrack without my dad. He is currently back in Odessa in the hospital with COVID. There hasn’t been an NHRA race where my dad and mom both haven’t been here. My parents are a huge part of our race team and them not being here is definitely a loss. I can’t thank everyone enough who has reached out to support my family during this time. It has been an overwhelming amount of support. We have worked hard on our Harlow Sammons Racing program over the offseason. We are very proud of the leaps and bounds that we have made as far as performance and look forward to it transcending on the racetrack.”

MASON MCGAHA, HARLOW SAMMONS RACING, HARLOW SAMMONS OF ODESSA CHEVROLET CAMARO SS (competing in ninth Pro Stock race; qualified 10th at Gainesville in 2020): “I am looking forward to getting back in the seat this weekend at the Gators. I am currently a full-time freshman in college and getting to go back racing is a mental break from school. Don’t get me wrong I enjoy class but getting to run a Pro Stock car is so much more fun. Now that I know what to expect from racing last year, I am a little more confident when it comes to driving. I am looking forward to more round wins and hopefully my first national event win this year.”

KYLE KORETSKY, KB RACING, NITRO FISH CHEVROLET CAMARO SS (made Pro Stock debut at track in 2020): “We ran eight races last season, but with the KB guys – Greg Anderson and Jason Line – I feel like I have nothing but the best equipment to go out there and win. Last year was sort of a learning curve; we’re still learning. We had good runs in the Doorslammer Nationals in Orlando last weekend and the Chevy Camaro is just running great.”

TROY COUGHLIN JR., ELITE MOTORSPORTS, JEGS.COM/ELITE MOTORSPORTS CHEVROLET CAMARO SS (taking over the ride from uncle and five-time Pro Stock champion Jeg Coughlin Jr.): “Going into the Gators as part of Team JEGS and racing Pro Stock with this team is a dream come true. We were fortunate enough to race most of the events last year with another team car but now the spotlight is directly on me. It’s a real challenge and very exciting at the same time. I don’t have any real expectations of what’s going to happen. I’ll be happy if I continue to get better and limit my mistakes. The car’s basically the same as when Uncle Jeg got out of it last year. We just inserted my seat and clutch pedal.”