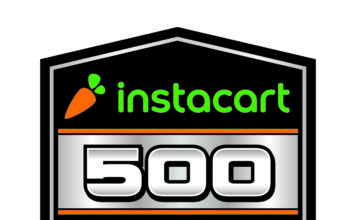 TEAM CHEVY POST-RACE NOTES AND QUOTES:
CHASE ELLIOTT, NO. 9 UNIFIRST CAMARO ZL1 1LE – Finished 5th
“We struggled really bad all the way up to that very last run, to be honest. We got better and had a good pit stop there at the end. Proud of the effort that the Unifirst team put in to pull out a top-five.”

KYLE LARSON, NO. 5 HENDRICKCARS.COM CAMARO ZL1 1LE – Finished 7th
IT SOUNDS LIKE YOU GOT LOOSE ON ENTRY ON THE LAST RUN AND HADN’T FELT THAT ALL DAY.
“Yeah, I hadn’t felt loose in all day and that last run, I got loose in and just couldn’t get in the corners as aggressive as I needed to. I ended up guarding my entry zones; my angles for exit aren’t great. It just kind of made everything harder. The No. 9 (Chase Elliott) and No. 4 (Kevin Harvick) got behind me and finished seventh. It was weird that I hadn’t had it all day, but all-in-all, I had a really fast car again. That’s very promising and just have to clean up mistakes on my end and have a smoother race.

WILLIAM BYRON, NO. 24 AXALTA CAMARO ZL1 1LE – Finished 8th
“Decent day here at Phoenix Raceway. We had a good car; ran in the top-10 all day and it just kind of ended there in 8th. We’ve got some things we need to work on when we come back, but we definitely know the areas to work on and improve. So, we just have to go to work on those things. Looking forward to it and looking forward to the challenge. We’re looking forward to Atlanta Motor Speedway next week.”

RICKY STENHOUSE JR., NO. 47 KROGER/ENERGIZER CAMARO ZL1 1LE – Finished 12th
“I’m really proud of the effort that everyone at JTG Daugherty Racing put in to get this No. 47 Kroger/Energizer Chevrolet to a third-consecutive top-15 finish. It would take a few laps for our car to come in, and with the couple of cautions we had in the middle of the race it made it tough to get that longer run where we had really strong speed. Once that came in, we were able to keep pushing forward to gain and keep our track position. Being consistent has been really key early in the season as we have a variety of racetracks and that was definitely the best run at Phoenix Raceway than I’ve had in several years. I’m looking forward to keeping the momentum going next weekend at Atlanta Motor Speedway.”

ALEX BOWMAN, NO. 48 ALLY/BEST FRIENDS CAMARO ZL1 1LE – Finished 13th
“Ended up 13th, but had a crashed car for 300 laps. Definitely solid, all things considered with the whole left side wiped out. We had to overcome damage. We had a fast car, but the left side damage didn’t help the pit crew on stops. Greg (Ives) made great changes on pit road to help the handling changes. Wish we could have gotten Ally/Best Friends a better finish, but we will come back strong next week.”

KURT BUSCH, NO. 1 GEARWRENCH CAMARO ZL1 1LE – Finished 15th
“We battled, but we don’t have much to show for it. We were really loose from the right rear corner. Man, it was like a mystery slide with the rear. Something weird happened with the rear gear late in the day. We were terrible loose. Last week was horrible tight. We have to find better balances with track conditions and these tires. The code sometimes says they’re the same, but it sometimes drives completely different. We just have to hunker down and find the rhythm of each of the runs. If there’s seven sets of tires, we’ve got a game plan for each set. We’ll get them next week.”

ROSS CHASTAIN, NO. 42 CHEVROLET ACCESSORIES CAMARO ZL1 1LE – Finished 19th
“19th – I’m not going to say that we are overly excited, but it was progress. Just the philosophy and feedback from the car for me was the best we’ve been this year. So, we’re trying to get this car to where I can drive it and hustle it; and as a race car driver, it’s pretty humbling whenever you can’t do the things you normally can do behind the wheel and this weekend, today, was a step in the right direction. We still have a long staircase to get up. But the Chevy Accessories car was okay. I didn’t do the best job behind the wheel, but I’m learning. And, pit stops were money. A lot of spots gained on pit road and onto Atlanta.”

ERIK JONES, NO. 43 MEDALLION BANK CAMARO ZL1 1LE – Finished 20th
“It was not exactly the day our team was hoping for with the No. 43 Medallion Bank Chevrolet Camaro ZL1 1LE, but there are some good things we can take from it. I thought our early and mid-run speed, especially earlier in the race, was pretty good. We were a top-15 Chevrolet Camaro ZL1 1LE. Then we lost the balance towards the end and ended-up slipping back and finishing in the 20th-place. So, it was not 100 percent what we wanted, but for a short track, it was a good day to build, learn and try to get better for the next one. We had good pit stops all day. We were pretty quick on pit road picking-up spots, so there are a lot of positives to take and move forward.”

DANIEL SUAREZ, NO. 99 COMMSCOPE CAMARO ZL1 1LE – Finished 21st
“I felt like the car was decent the majority of the race. The car was driving pretty good. I was pretty happy with the balance of the car on the long run; the short run wasn’t that great. We made some adjustments in the last 80 laps and I wasn’t very happy with it. But, all-in-all, really proud of my guys and we have to keep getting better. We had a few mistakes on pit road; lug nuts and stuff like that. Decent day, but we just have to keep getting better.”

TYLER REDDICK, NO. 8 NATE BARNES/QUARTZ HILL RECORS CAMARO ZL1 1LE – Finished 29th
“Today was a tough day for our No. 8 Nate Barnes / Quartz Hill Records Chevrolet Camaro ZL1 1LE at Phoenix, but we’ll study and learn from our race. We had decent long run speed throughout the day that allowed me to climb up through the field during the longer green flag runs of the race. I was just too tight in the center of both turns to get through them as good as I would have liked and I needed more to fire off with on the restarts, but we were making some small gains during the end of Stage 3. Unfortunately, I had a miscue on our final stop of the day and that led to speeding on pit road, and then a valve stem broke and I got into the wall. We were able to finish the race though and fought for every spot that we could in the final handful of laps. A frustrating day for our team, but we’ll learn from it and move on to Atlanta.”