Motul goes off road enduro in partnership with FIM ISDE 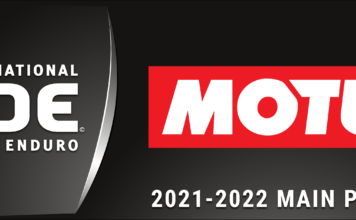 The FIM is delighted to announce that Motul has become one the main partners of the FIM International Six Days of Enduro (ISDE). The agreement with the French lubricant company is for an initial two year period and also sees them hold Lubricant and Maintenance exclusivity at the event. The newly signed deal, with what remains the oldest event in the FIM calendar, will see Motul fully launch into the Enduro off-road segment, complementing its existing involvements in the Dakar amongst other all-terrain events and its partnership with the off-road bike manufacturer Sherco.

Only a year ago Motul signed a global partnership deal with the fast-growing, exciting and championship-winning bike manufacturer, Sherco, which also encompasses its racing activities. Motul and Sherco will offer a wide range of support services during the ISDE to around twenty privateer bikers from around the world plus, of course, support for the official factory team riders in their respective national teams.

The 2021 edition of the FIM ISDE will take place in the Apennine region of Northern Italy between Lombardy and Piedmont from 30th August to 4th September. The crème de la crème of enduro riders will travel over punishing off-road surfaces through the Italian countryside before ending with The Final Motocross on the Tazio Nuvolari Circuit, south of Milan. The total length of the course, including special tests, will be approximately one thousand kilometres and the riders will do one lap each day, some of which will be time checked.

Motul will be playing a leading role in this iconic event, and both competitors and fans will enjoy a major activation programme onsite as well as following all the action and excitement digitally through Motul’s social media platforms. The highly recognisable Motul Racing Lab truck will be on site offering oil analysis and free advice to riders, just as it does on the Dakar. Customers and Motul Ambassadors will be also present from different parts of the world.

Enduro racing is hard in every sense! There are long stages, often over sun-baked, rock-hard terrain or in dusty valleys, and temperatures can soar. Keeping both bike and rider moving smoothly is therefore a key component on the route to success. Bikes will benefit from Motul’s race-proven 300V Factory Line Off Road and 300V2 products, plus the specific 800 2T engine oil which is tailored for off-road use. Motul RBF 700 Factory Line Racing Brake Fluid is an ultra-high performance fluid perfect for this environment, and Motocool and the full range of MC Care products will be the ideal products for every competitor.

Anton Malyshev, Motul Head of Business – Powersports said: “This is a really exciting development for us, and it will offer us the perfect opportunity to validate and promote the quality and performance of our extensive range of off-road products in front of the whole enduro community. We have formed an excellent relationship with the FIM over the years, largely through our partnerships in other motorcycle championships, but to partner with such an historic and globally famous event is very special. We can’t wait for it all to kick off at the end of August and to be working closely alongside our partner Sherco on this!”

Fabio Muner, FIM Marketing & Communications Director said: “The International Six Days of Enduro is the oldest World Championship event that the FIM has in its calendar and the arrival of a premium brand such as Motul is confirmation that the 6 Days is not only an iconic event and a proving ground for men and machines, but that it is also a unique platform for B2C marketing activations thanks to the huge participation of the riders and the fans at every edition. Having Motul as the main partner of the ISDE reinforces their position in the off-road racing market and also strengthens our fruitful marketing and technical cooperation in the enduro segment too.”

ABOUT MOTUL
Motul is a world-class French company specialised in the formulation, production and distribution of high-tech engine lubricants (two-wheelers, cars and other vehicles) as well as lubricants for industry via its MotulTech activity.

Unanimously recognised for more than 165 years for the quality of its products, innovation capacity and involvement in the field of competition, Motul is also recognised as the specialist in synthetic lubricants. As early as 1971, Motul was the first lubricant manufacturer to pioneer the formulation of a 100% synthetic lubricant for automotive engines, the 300V lubricant, making use of Esters technology and issued from the aeronautical industry.

Throughout the years, Motul has gained experience as an official supplier to many racing teams and manufacturers and contributes with them to further technological development in motorsports. Using the racetracks and motorsport events around the world as a living laboratory, the consumer products on the shelves today have all benefitted directly in terms of performance, reliability and efficiency.

Among its 50 FIM World Championships the main events are MotoGP, Superbike, Endurance, Motocross, Supercross, Trial, Enduro, Cross-Country Rallies and Speedway. Furthermore, the FIM is also active and involved in the following areas: public affairs, road safety, touring and protection of the environment. The FIM was the first international sports federation to impose an Environmental Code in 1994.
FIM Data Privacy Legal Notice
Please click on the following link to know more about FIM Data Protection Policy. By remaining on FIM’s contact list you expressly authorized FIM to contact you for marketing and communication purposes. You have the right to opt out at any time by clicking on
unsubscribe.You are also entitled to request that FIM to erase, rectify or send you any personal data FIM holds about you under the GDPR by sending your written request to gdpr-request@fim.ch.