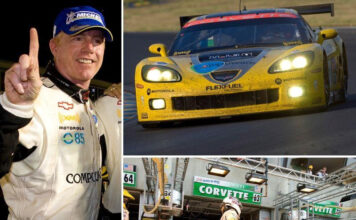 BRASELTON, Georgia (April 8, 2021) – Johnny O’Connell, the premier American Corvette race car driver of his generation and one of the most successful sports car racing drivers of the modern era, has been named the Grand Marshal of the Historic Sportscar Racing (HSR) 43rd Mitty at Michelin Raceway Road Atlanta, April 21 – 25, which showcases Corvette as the Featured Marque.

“Needless to say, it is pretty cool to be asked to be the Grand Marshal for this year’s Mitty, especially with Corvette being the featured marque,” O’Connell said. “To be an American and race for Corvette, and to three times stand with them on the top step of the podium at the 24 Hours Le Mans, well you can’t even begin to put into words that feeling when they play our National Anthem and raise our American flag.”

In a 20-year relationship with GM that ended just two years ago, O’Connell raced and won championships in Corvettes and Cadillacs. It was his accomplishments behind the wheel of “America’s Sports Car” that brought him the most fame.

“It kind of goes without saying, but of the many years I spent racing, it was my time racing for Corvette that I’m best known for,” O’Connell said. “I think I could argue it was one of the most important times as what we did really redirected Chevrolet’s passion and focus on Corvette and its global appeal.”

In his first start with GM at the wheel of one the trademark bright yellow Corvette Racing entries, O’Connell came home an overall winner in the 2001 Rolex 24 At Daytona.

Co-driving the victorious Corvette C5-R with Ron Fellows, Chris Kneifel and Franck Freon, the 2001 win was O’Connell’s first of 41 victories with Corvette Racing, second only to longtime teammate Oliver Gavin.

A resident of nearby Flowery Brach, Georgia, O’Connell and his family live just minutes away from Michelin Raceway Road Atlanta.

“Being Grand Marshal is quite a cool honor,” said the 58-year-old O’Connell, “but it’s a double-edge sword! I don’t see myself being old enough yet to serve as a Grand Marshal! That it is also at Michelin Raceway Road Atlanta, my home track, well it’s special to say the least. I recall going to the Mitty years ago and seeing one of my old cars there. I thought ‘wow, my cars are starting to be considered historic!’”

O’Connell also won four titles for GM driving Cadillacs in Pirelli World Challenge, the last series in which he competed full time. The last time he raced at a professional level was the 2018 World Challenge round at Utah Motorsports Campus, where he shared a Robinson Racing-run Chevrolet Camaro GT4.R with his son Canaan O’Connell.

“All in all, I’ve been so blessed in my career and life,” O’Connell said. “Getting to live out a boyhood dream and race with and against some of the world’s best drivers, I’ve been very lucky indeed. I consider myself very fortunate.”

Competitor entries are open and spectator tickets are on sale now for the HSR 43rd Mitty. A variety of ticket options, from tent camping and daily admission on up to RV Parking and weekend tickets, are available at www.HSRTickets.com.

Current online ticket orders are shipped and discounted from at-event prices, but advance ticket purchases after today, April 8, will be held at HSR Will Call in the Driver/Crew Registration Office at Michelin Raceway Road Atlanta for pick up starting Thursday, April 22.

The early-entry deadline for competitors is today, April 8. Run Groups are available for everything from all types of sports car from the last 60 years to Stock Cars to open-wheel Formula and Indy cars. Entry forms are available at www.HSRRace.com.

More information, including the event schedule, can be found on the official HSR 43rd Mitty event page at www.HSRRace.com.
About HSR: Historic Sportscar Racing (HSR) was formed in the mid-1970s with an event at Road Atlanta. There was one goal then and it remains true today: to celebrate the race cars from the past. As a “time machine” of sights and sounds, HSR provides a venue for competitors and spectators alike to share in the wonderful history and excitement created by the cars that competed at race tracks around the world. HSR currently sanctions eight vintage and historic racing events at some of the world’s most renowned race tracks, including Road Atlanta, Sebring International Raceway, Daytona International Speedway and more. The complete schedule and full event information can be found on HSR’s website at www.HSRRace.com. Look for the HSR Channel on YouTube and follow HSR on Facebook at www.Facebook.com/HSRrace/ and on Twitter and Instagram at @HSR_race. A dedicated website for the Classic 24 Hour at Daytona presented by IMSA is available at www.Classic24hour.com.