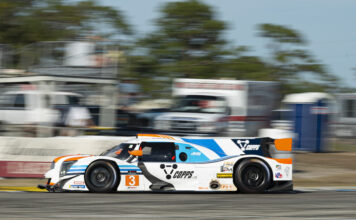 Lexington, Ohio (11 May 2021) – After having last raced in the category at Sebring in March, Jr III Racing returns to IMSA Prototype Challenge (IPC) competition at Mid-Ohio Sports Car Course this weekend with a new driver line up for the No. 3 Jr III Racing Ligier JS P320. Mike Skeen and Terry Olsen will join the team at the 2.4-mile natural terrain road circuit set in rural Ohio.

Sports car veteran Skeen brings years of experience in IMSA competition at Mid-Ohio to the No. 3, including a pole position in IPC in 2019. Skeen will make his 13th start at Mid-Ohio – the most recent coming in 2020 where he scored a podium finish in Trans Am competition on his way to taking the championship.

Skeen is no stranger to the Jr III Racing Ligier. Serving as Jr III Racing’s driver coach, Skeen is an integral part of the shake down and set-up of the car during test sessions ahead of each race weekend. The start at Mid-Ohio in the No. 3 Ligier will mark Skeen’s first race start in the new-for-2021 machine with the team.

With knowledge of the course and car, Skeen is optimistic for the weekend ahead.

“Racing with Billy (Glavin) and this team is something I have always wanted to and I am excited to be able to do it at Mid-Ohio in the Ligier,” said Skeen. “Traveling with the team to tests has allowed me to not only familiarize myself with how the car handles but has given me more seat time to push myself and the car to lay down fast laps. The Jr III Racing team prepares a fantastic car. Terry (Olsen) and I have all the tools to be successful and go for a win.”

Joining Skeen in the No. 3 Jr III Racing Ligier is Terry Olsen. Olsen is familiar with the prototype format having run in Radical Cup North America and winning the 2018 and 2020 Masters Class Championships.

Rising through the sports car ranks, Olsen has utilized Skeen as his driver coach through his career, and is continuing his progression in the sport with the move to the highly capable LMP3 machines in IPC competition. Olsen ran the older generation Ligier at Daytona International Speedway in January but will make his first race start in Ligier JS P320 at Mid-Ohio.

“Moving into Prototype Challenge with Jr III Racing is an amazing step for my racing,” said Olsen. “Billy (Glavin) and his team are class acts that provide and prepare a phenomenal car. Working with Mike Skeen for so long gives me confidence that we will be able to run at the front and get a podium.”

The change in driver line up was initiated by a family health issue for the Palmers, who race as a father and son duo and will look to return to IMSA action later this summer.

“We are all rooting for the Palmers through this challenging time for them-family is the most important thing, and we look forward to having Greg and Eric back whenever they are ready,” said Jr III Racing team owner Billy Glavin. “It seems like it has been a long time since Sebring, but we have been busy with our vintage outings as well as several tests. We are fortunate to have the opportunity to go to Mid-Ohio with Terry and Mike and hopefully can bring home a good result with the No. 3 car this weekend.”

On-track action begins Friday, May 14th with practice before qualifying and race day on Saturday, May 15th. Live streaming of Round Three of the IMSA Prototype Challenge will be available via TrackPass on NBC Sports Gold.