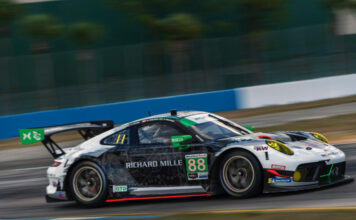 Both Drivers have Podium Finishes at Mid-Ohio and Hope to Add Another With the No. 88 Richard Mille/Champion Porsche 911 GT3 R in IMSA GTD Race This Weekend

LEXINGTON, Ohio (May 12, 2021) – Rob Ferriol and Katherine Legge will co-drive the No. 88 Richard Mille/Champion Porsche/GridRival Porsche 911 GT3 R for Team Hardpoint EBM this weekend at Mid-Ohio Sports Car Course, round three of the IMSA WeatherTech SportsCar Championship season and the first two-hour, 40-minute sprint race of the season.

The sprint race is scheduled for 2:40 p.m. ET on Sunday, May 15, shown live on NBCSN and via TrackPass on the NBC Sports app.

Ferriol and Legge both have limited experience on the 2.258-mile permanent road course, but each have also been a part of a podium celebration at the track.

Team Hardpoint EBM team owner and driver Ferriol earned four podiums early in his IMSA career, with three runner-up finishes and a third-place finish in IMSA Porsche GT3 Cup Challenge during the 2018 and 2019 seasons. Those finishes were part of a two-year program that helped catapult Ferriol to this, his second season as team owner and into the GT Daytona class of IMSA’s top-level championship.

“Racing is a fickle beast,” Ferriol said. “The track and your competitors don’t care how good or bad you did the last time, only what you show up with on race day. That said, those prior successes do give us something to build on as drivers. As a team, we’ll combine that experience with that of Owen Hayes and our engineering squad, as well as our ever-improving pit crew, and bring the best possible package for our No. 88 Richard Mille/Champion Porsche/GridRival Porsche GT3 R to the race on Sunday. The rest is up to Lady Luck.”

Like Ferriol, Legge has a runner-up finish at Mid-Ohio. Legge was part of the team that finished second in 2018 and was also the site of her NASCAR Xfinity Series debut the same year.

“I’m very much looking forward to going back to Mid-Ohio,” Legge said. It is a track that brings a smile to your face when you are driving it. I have fond memories of my NASCAR debut and an IMSA podium there, but I actually haven’t raced there very much at all. It is tricky to be fast there, so Rob and I will be looking to build on Sebring results and find a setup we both like. We raced the same car in Daytona, so teaming up isn’t entirely new, and I’m looking forward to working with Rob. Hopefully we can get a good result for the team, and for Richard Mille, and build on that moving forward.”

Though Ferriol and Legge will share the car alone for the first time, they teamed with Earl Bamber and Christina Nielsen for a 10th-place finish at the 24 Hours of Daytona in January for Team Hardpoint EBM.

“The key for Katherine and me this weekend will be to ensure we make efficient use of the two practice sessions so we’ve got the right car balance going into the race,” Ferriol said. “Having driven with her at Daytona, as well as watched that heroic push to the finish at Sebring, I’m genuinely excited to see what we can put together at the first Sprint Cup race of the year. She’s proven to be a formidable competitor time and again, so my goal is to hand the car over in the best possible position, then watch her go to work.”

That work begins on Friday, May 14, with an afternoon practice session at 4:30 p.m. ET. The team gets another hour of practice on Saturday morning at 8:50 a.m. ET, with a quick turnaround to qualifying at 12:20 p.m. There is a 20-minute warm-up session on Sunday morning prior to pre-race ceremonies and the green flag.

About Team Hardpoint EBM:
Hardpoint Motorsports was founded by Rob Ferriol in 2018 with the vision of combining his experience as a successful entrepreneur with his passion for racing. Team Hardpoint EBM is a joint venture between Team Hardpoint and Earl Bamber Motorsport formed in late 2020 to combine the resources of EBM and co-owners Earl Bamber and Will Bamber and the early success of Team Hardpoint. Headquartered at VIRginia International Raceway, the team’s 2021 plans include a full-season effort in the IMSA WeatherTech Sports Car Championship in a Porsche 911 GT3 R and a multi-car effort in the IMSA Porsche Carrera Cup North America. More information on Team Hardpoint EBM can be found at www.hardpoint.com or through its strong social media presence on Facebook, Instagram and Twitter.