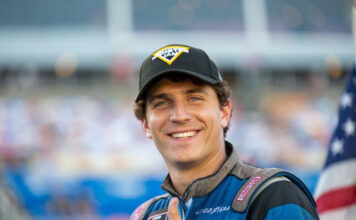 A native of Itasca, Ill., Murphy is poised to make his second NASCAR Camping World Truck Series (NCWTS) start of the season after posting a solid and career-best 13th place finish in the second race of the year at the Daytona (Fla.) International Speedway Road Course driving for NEMCO Motorsports.

Launching his NASCAR career in 2014, Murphy, 24, has gained notoriety as being the only driver to compete in both NASCAR and Monster Jam driving a Monster Truck.

While continuing a part-time presence in NASCAR in 2017, he was crowned Monster Jam Rookie of the Year and two years later 2019 Monster Jam Rising Star.

Continuing to broaden his racing resume, Murphy is looking forward to returning to the NASCAR world behind the wheel of the No. 11 INOX Supreme Lubricants truck for team owner and mainstay driver Spencer Davis.

“I can’t wait to get back behind the wheel of the No. 11 INOX Supreme Lubricants truck for Spencer Davis Motorsports for NASCAR’s first stop at the Circuit of the Americas,” said Murphy. “I have been turning wrenches for Spencer (Davis) ever since the last time I was behind the wheel at the Daytona Road Course back in February and it has been a blast.

“The entire SDM team works hard to bring the best trucks they can to the track every week and being that I have laps at COTA, I know that we will have a great run and make all of our partners and fans proud!”

With much of the field expected to have little to no track time around the 3.4-mile road course, Murphy is hoping his previous experience at COTA in a road racing coaching role will pay dividends throughout the weekend.

“I am very thankful to have practice and qualifying on the schedule this weekend,” added Murphy. “If the weather doesn’t get in the way, the extra track time at COTA with the Spencer Davis Motorsports team will put us in a good spot for the actual race on Saturday afternoon.

“All things considered, I think we have the opportunity to contend for a top-10 finish this weekend and that would be a huge blessing not only to me but for this team and all of our partners.”

In February, SDM announced that INOX Supreme Lubricants will serve as the team’s primary partner this season.

INOX product range was first released in 1989 with the Original INOX MX3 Lubricant. The original MX3 product was in development stages for two years prior to release with testing and focus on creating the right product for the market.

The INOX product range continues to grow with 12 products on the market, each with their own many specialized qualities used in all different industries. All their products are tested and trialed before hitting the market to ensure the best of quality is maintained in the INOX name. INOX products are available at all major industrial, electrical, automotive, hardware,
bearing and mining, marine, fishing and tackle outlets, plus many more locations.

Team principal Spencer Davis is happy to have Murphy behind the wheel.

“Camden has been a great asset to our Spencer Davis Motorsports team this season,” added Davis. “Now, he has a chance to continue our solid season on the track with a strong performance at COTA. I know he is excited, and we are thrilled that with his craft for road course racing, we have a legitimate chance of being in the headlines on Saturday afternoon.”

Murphy is poised to make his 28th career NCWTS start in the NASCAR tripleheader weekend in Austin, Texas.