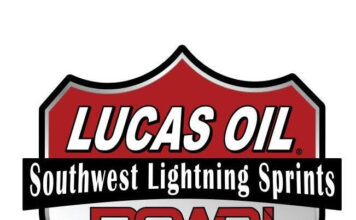 (Lakeside, CA, May 18, 2021) Lakeside, California’s Grant Sexton warmed up for the end of the month Lucas Oil POWRi Lightning Sprint Car Nationals when he won his second straight Southwest Series main event last Saturday at the Barona Speedway. The victory propelled the 16-year-old high school student into the SWLS series point lead for the first time in 2021.

Sixteen lightning sprint cars turned up on the chilly night to contest the first non-wing race of 2021 on the San Diego County quarter mile dirt Oval. Sexton started the March towards his second straight triumph by winning his heat race. The other two heat races were captured by the talented rookie duo of Braden Chiaramonte of El Cajon and Alpine’s Matt Sotomayor.

Veteran Jim Squire of El Cajon started the 20-lap main event on the pole with Norco’s Rudy Padilla alongside. The second row was made up of Peter Benker of Alpine and San Diego’s Jason Arnolde. El Cajon’s D.J. Dumas and Sexton opened the race in row three. Padilla’s white car screamed into the lead at the drop of the green flag and was chased into turn one by Squire and Benker. Benker went wide going into turn three on the first lap and was quickly overtaken by Dumas and Sexton.

By the end of the second lap, Padilla had built an impressive lead. Dumas tapped Squire and momentarily bobbled as they came off turn four on the same go around. By the time he recovered, Sexton had shot past for third place. It took the teenager four more laps before he knifed his way to the inside of Squire coming off turn four on the sixth lap for the runner up position. By the end of the eighth lap, Sexton had eaten up the once sizeable lead Padilla had established and was breathing down his neck for the top spot. As they exited the second turn on lap nine, Sexton again used the inside and this time he took the lead and relegated Padilla to second.

Once out front, Sexton, in the Sexton Fire Protection/BK Wings/Troy Dirt/Victory Graphix/Swift Powdercoat/Maxima Oil/Infiniti Shocks/Scotty and Jimmy Keys/2020 XXX/Kawasaki ZX10, put on a clinic and ran away from the pack and was into lapped traffic on lap 11. That all went for naught when one lap later Dumas biked the car, slammed the wall and rolled over in turn four. While Dumas was not injured, his tumble forced a red flag and it also wiped-out Sexton’s huge lead.

For the restart with nine laps to go, Sexton was the leader, and he was being followed by Padilla. Right behind them was the trio of Squire, Sotomayor, and San Diego’s Darren Brent. They had been waging a torrid battle for the third spot before the red flag came out. Sexton immediately pulled away from Padilla on the restart. Simultaneously, Sotomayor continued his forward march when he took the third-place spot from Squire. Less than a lap later, the rookie continued with his impressive run when he flew to the inside of Padilla and commandeered second.

Sotomayor was fast, and he pulled away from Padilla. However, he was not fast enough to chase down Sexton who won by nearly a full straightaway. Sotomayor and Padilla had best ever SWLS finishes in second and third. San Diego’s Parker Dumas, who came from ninth to challenge Padilla for third at the finish, placed fourth. Squire came home fifth.

Sexton was also the main event “Hard Charger,” and he took over the point lead from teammate David Bezio, who did not start in the main event. Bezio is second in the championship standings and trails Sexton by 83-points. Rookies Sotomayor and Chiaramonte are third and fourth. Parker Dumas rounds out the top five.

The Lucas Oil POWRi Southwest Lightning Sprint Cars return to action when they put the wings back on their cars at the Barona Speedway on June 12th.