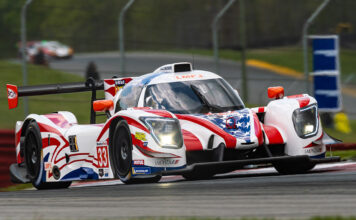 Building on the program from their Jupiter, Florida shop location, the team moved up from the IMSA Prototype Challenge this season, with Willsey and Barbosa combining on board the No. 33 SCM Exelixis Ligier JS P320.

Actively pursuing both sponsorship opportunities and fielding inquiries from interested Silver and Bronze-rated drivers, Creech hopes to secure the necessary budget to compete at the Sahlen’s Six Hours of the Glen in two weeks. The team is in a strong competitive position, holding second in the IMSA Michelin Endurance Cup, and is focused on building on that with strong outings to finish out the season.

“We are grateful to Lance for his hard work and dedication as we formed the team late last year,” said Creech. “We are disappointed that he cannot continue but hope that we can find a driver to compete alongside João for the rest of the 2021 season.

“Our biggest focus right now is to keep the IMSA team going,” said Creech. “We have a great deal of other work going on now in our shop, including an IPC program, as well as restoration and customer testing programs. But IMSA continues to be our primary focus going forward, both for the remainder of this season and looking ahead to 2022. As I said when we joined the WeatherTech series, we’re in this for the long haul so are looking forward to being able to continue moving this part of our program forward.”

The Sahlen’s Six Hours of the Glen takes the green flag Sunday, June 27 at 10:40 a.m. Eastern. The race will be broadcast live in the U.S. on NBCSN and NBC Sports Gold’s TRACKPASS, while international viewers can watch via IMSA.tv. IMSA Radio will also be available at IMSA.com.