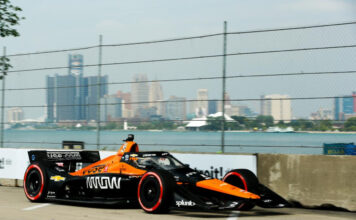 PATO O’WARD PUTS CHEVY ON THE POLE FOR RACE ONE ON STREETS OF BELLE ISLE
DRIVER OF NO. 5 ARROW MCLAREN SP CHEVROLET WINS 2ND NTT P1 AWARD OF HIS YOUNG CAREER

DETROIT (JUNE 12,2021) – Pato O’Ward put his No. 5 Arrow McLaren SP Chevrolet on the pole for Race One of the Chevrolet Detroit Grand Prix.

Today’s pole is the second NTT P1 Award for the second-year driver.
PATO O’WARD POLE QUOTE: YOU CAUGHT SOME TRAFFIC THERE, BUT STILL PUT IT ON THE POLE. HOW DID YOU GET IT DONE?
“Yeah, I did. But I wasn’t going to be passed I don’t think. You need to put so much faith into this place. You have to put faith in the car, that it’s going to stick. But when you hit it right, how can I say it? When you nail a lap, you can tell you’ve nailed it.”

TALK ABOUT THE RISK VERSUS REWARD. IT TAKES RISK, BUT THE REWARD IS BIG
“I was actually talking about this with Felix (Rosenqvist, teammate) that even compared to like a St. Pete, the faster you go here and the more you attack, the more grip you have. But when you’re not attacking, and you don’t feel the grip, it’s like well, is it going to give it to me? So, you kind of just have to go, stick please! (laughs). You just have to go for it. Honestly, I’m a little surprised, because I think I nailed a pretty good lap in the first group, and I was way off. But we nailed it the second time.”