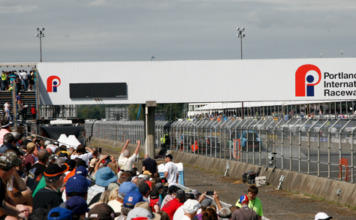 PORTLAND, Ore. (July 27, 2021) – After race fans and festival-goers missed out on this spectacular event last year, the admission gates will open again to fans in just 45 days for the Grand Prix of Portland. Single Day tickets go on sale today at 10 a.m. PT for the NTT INDYCAR SERIES race weekend returning to Portland International Raceway (PIR), Sept 10-12, 2021. Tickets can be purchased online at portlandgp.com.

The NTT INDYCAR SERIES, featuring the cars and star athletes of the Indianapolis 500, headlines the race weekend. Will Power and Takuma Sato, the two previous Grand Prix of Portland winners, are past Indianapolis 500 champions who will be in the field again. This year’s winner and now a four-time champion of the Indy 500, Helio Castroneves also will make an appearance at PIR. A famous rookie to the series is Jimmie Johnson, the seven-time NASCAR Cup Series champion, and is joined by other hot young drivers in Alex Palou, the current NTT INDYCAR SERIES points leader, and Pato O’Ward who ranks second in the season standings. The six-time NTT INDYCAR SERIES champion and 2008 Indy 500 winner Scott Dixon will be looking to score the first win of his illustrious career at PIR.

“After last year’s disappointment, the anticipation really accelerates now for the Grand Prix of Portland with race fans across the Pacific Northwest at the release of our single day tickets,” said Kim Green, co-owner, chairman and CEO of Green Savoree Racing Promotions, organizers of the Grand Prix of Portland. “The NTT INDYCAR SERIES always provides exciting finishes over its history running at PIR, and this year will be no exception as the championship enters its final stretch run on the West Coast. We are excited to also feature racing’s future stars on the weekend schedule with three support series on track.”

It will be the first time at PIR since 2012 for the ARCA Menards Series West showcasing the rising stars of NASCAR in fender-banging stock car racing action. USAC National .25 Midget Series will take the green flag at PIR for the first time on a temporarily constructed 1/20th mile-long course in one of PIR’s paddocks. The national dirt and pavement series features drivers ages five and up from all across the country competing in quarter midgets and looking to climb the ladder as the next stars of motorsports.

A limited quantity of 3-Day Gold Level Grandstand offering reserved seating for the highest rows are still available and include a Paddock Pass to get up close to the cars and drivers in the “locker room of motorsports.” A Pit Pass provides access to the pitlane during practice and qualifying sessions.

Children 12 and under receive free general admission to the event. This also includes complimentary access to the NTT IndyCar Series Paddock throughout the weekend when accompanied by a ticketed adult. To enhance their experience further, the youngest fans can participate in the Grand Prix of Portland Rookie Racers. This immersive program, offering unique experiences throughout the race weekend, will go on sale soon at portlandgp.com for a nominal fee.