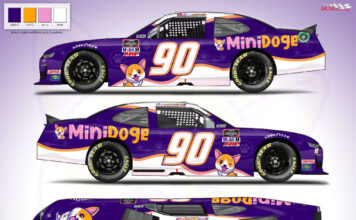 Mooresville, NC (August 4, 2021) – NASCAR Camping World Truck Series Regular, Spencer Boyd revealed a multi-race campaign with DGM Racing in the NASCAR Xfinity Series. The primary sponsor for these races will be MiniDOGE, a cryptocurrency developed by DevTeamSix. Boyd’s first race in the No. 90 Chevrolet Camaro will be at Richmond Raceway on September 11, 2021.

“I’m a racer,” laughed Spencer. “I want to race everything and anything…shoot, I’ll race lawnmowers! This deal gets me more seat time allowing me to improve as a driver. I appreciate Mario (Gosselin) giving me the opportunity to race with his team alongside my good buddy Josh Williams. I think DevTeamSix will love the exposure for MiniDOGE as we look to the future with their great team of forward thinkers.”

Boyd had previously announced on July 23 that MiniDOGE would be coming on board in 2021.

“I’ve watched Spencer’s career for some time now,” mentioned team owner Mario Gosselin. “We even raced each other a few times back in 2017. He is a hard worker with a promising career ahead of him. We are happy to have him at DGM for a few races together this year.”

Spencer Boyd made one NASCAR Xfinity Series start at New Hampshire Motor Speedway earlier this year, but is no stranger to the series. In fact, Boyd has nearly as many laps in an Xfinity car as he does in Trucks highlighted by his full-time effort in 2018 with SS Greenlight Racing.

Deven Hammond, Chief Communications Officer for DevTeamSix, commented on the look of the MiniDOGE Chevrolet Camaro, “We know engines are all about horsepower, but we wanted to get some dog power in there too! There aren’t too many purple cars out there and know MiniDOGE will shine brightly with Spencer behind the wheel.”

The schedule for MiniDOGE’s additional primary races will be released at a later date.

Cirkul, a Modern Beverage Platform and One of the Fastest Growing CPG Companies in US, Expands Partnership with Kaulig Racing for the 2023 NASCAR...