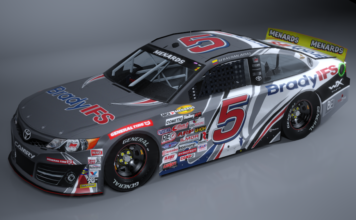 Sebastian is a first-generation race car driver from Bogota, Colombia. At twenty-one years old, he is the next Colombian driver coming up the ranks of NASCAR since Juan Pablo Montoya. Sebastian began his racing career at the age of eleven when he expressed an interest in karting. His natural ability for driving propelled him quickly through the ranks and opened doors for him.

The desire and motivation to be a champion compelled Sebastian’s father, and biggest fan, Nestor Arias, to sell the family home in Bogota so that he could finance Sebastian’s journey through the racing ranks to his ultimate dream of NASCAR. The money helped him get where he is today, though it ran out years ago. Now it is Sebastian’s driving ability, humility, and perseverance that must take him all the way to the NASCAR Cup Series.

Sebastian is extremely grateful for the sponsorship support from BradyIFS. Sebastian said, “I feel extremely blessed to have this opportunity with BradyIFS. I want to thank the team at BradyIFS for not only believing in my abilities to drive a race car, but also for helping me advance my career. I look forward to meeting BradyIFS’ employees and customers at their headquarters in Los Angeles the day before the race, and at the track.”

Sebastian went on to say, “I also want to thank Bill McAnally for giving me this opportunity to drive one of his cars. He has built the best team in this series and has ten championships to prove it!”

Since teaming up with his management company InterPhase Entertainment earlier this year, Sebastian has gained sponsorship from BradyIFS, Wiley X, BeyondEnergy, SPARCO, NextLevel Racing and Thrustmaster, with more sponsors looking at what Sebastian is doing. His manager Ryan Johnston says, “Sebastian is the next-generation Colombian driver breaking into the ranks of NASCAR. He used to watch Juan Pablo Montoya race in NASCAR with his family on the couch from their home in Bogota, Colombia. The fire in Sebastian to reach his goals are evident with his willingness to learn and adapt, which is crucial in this competitive business. Sebastian had wanted to work with us for over five years and my thoughts on him were accurate, sponsors are taking notice.”

The ARCA Menards Series West race at Irwindale Speedway can be seen on NBC Sports on August 29th at 4:30 p.m. EDT. Follow Sebastian at @sebastianariasracing and watch his progression as he climbs the ladder of NASCAR.

Greg Van Alst and Team Head To Michigan Back on Track