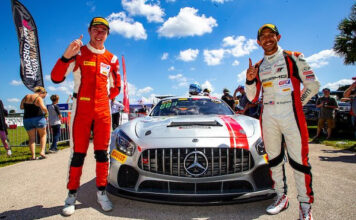 SEBRING, Florida – The No. 35 Conquest Racing West Mercedes-AMG GT4 team, and co-drivers Michai Stephens and Colin Mullan, broke through for their first overall and class victories in Saturday’s weekend-opening Pirelli GT4 America SprintX race at Sebring International Raceway. The overall and Silver-class wins came in just the third weekend of Pirelli GT4 competition for the new Mercedes-AMG Motorsport Customer Racing team and highlights a string of four-straight podium finishes dating back to the second race of the Conquest team’s debut weekend at Road America.

Starting third overall, Stephens battled for the race lead from the start of the 60-minute Pirelli GT4 sprint. Quick work by the Conquest crew during the driver change pit stop put Mullan back in the race in third and within reach of the leaders.

Mullan moved into the overall lead with 16 minutes remaining, passing the pole-winning car that had led every lap of the race to that point. He went on to take the checkered flag 6.720 seconds ahead of the second-place competitor.

The No. 35 team and drivers shared the Silver-class podium with co-drivers Kenny Murillo and Christian Szymczak, who put on a late charge of their own in the No. 72 Murillo Racing Mercedes-AMG GT4 to give Mercedes-AMG Motorsport Customer Racing teams a one-two Silver-class finish for the second race weekend in a row. One race ago at Watkins Glen, Murillo led Conquest across the finish line for the one-two punch in Saturday’s opening race.

Szymczak moved up several positions in the closing minutes for the runner-up showing and fourth-place overall finish. The result moved the Murillo drivers and team closer to clinching the Silver-class season championship, which they will likely do with a similar finish in Sunday’s second and final 60-minute Pirelli GT4 race of the weekend.

For the second straight race, Wilson won the Am-class pole with the fifth fastest overall time in Saturday morning qualifying. He then joined Berry in leading the most race laps in the Am-class in the one-hour sprint on the way to a second-place class finish.

Mercedes-AMG GT3 teams competing in the weekend’s featured Fanatec GT World Challenge powered by AWS doubleheader endured a string of bad luck in Saturday’s first race but did see some success in qualifying.

Driving the No. 33 Winward Racing Mercedes-AMG GT3, Mikael Grenier won the Silver-class pole for Sunday’s race with a time that was good enough for the second-fastest overall lap of the session.

Sunday’s SRO America schedule at Sebring begins with a 40-minute GT America race at 8:30 a.m. EDT. Pirelli GT4 America is next up for its one-hour weekend finale at 10:30 a.m. EDT before the Fanatec GT World Challenge series brings the curtain down on the weekend with its closing 90-minute race at 1:15 p.m. EDT.

Colin Mullan, Driver – No. 35 Conquest Racing West Mercedes-AMG GT4: “It was definitely a race we had to work for, for sure. Throughout the race, tire management was a key factor, and luckily our Mercedes-AMG GT4 is really good on its tires. It’s definitely one of its big strengths. Coming here to Sebring, where it’s a pretty big track for that, we didn’t know how well we’d be able to race but it turned out amazing. This Mercedes-AMG GT4 just proves in another weekend at the race track that it can be quick no matter what you throw at it out there. We saw the leader burning off its tires earlier in the race, managed our own pace, and we were able to reel him in that second half. Coming out of Turn 10, I saw he had a bad exit out of there and got a little unsettled. I knew if we could get a good exit, we’d need to set up a pass immediately and capitalize on those mistakes. Going into Turn 13, I was able to stick my nose in and get him a little unsettled, and we were able to make the move stick there. Those Pirellis held up amazing through the race on our Mercedes-AMG GT4. It was a race we had to work for.”

Christian Szymczak, Driver – No. 72 Murillo Racing Mercedes-AMG GT4: “It was definitely a lot of fun. It’s always fun racing this car. The Mercedes-AMG GT4 is nice and really good over the long distance. If you’re trying to catch somebody, and maybe you’re not in the lead, you’ve got good chances because you know you’ve got a good car underneath you for the duration of the race. We were able to put down consistent lap times and catch some cars and make a couple of good passes. Overall, the result was good, second in class, so we’ll take that.”

Kris Wilson, Driver – No. 16 Capstone Motorsports Mercedes-AMG GT4: “The start was good. I was just trying to keep the pace with some of the kids out there and bring it in for Jon to finish his first stint since he was here 25 years ago. We threw him in the deep end, and he did an awesome job. He brought it home in second place. That’s a tough crowd with the higher rated drivers. We always do it with John Allen, but this was Jon Berry’s first experience with that. I warned him and said ‘look, this is not easy and you’re going to have to deal with it. And he did, it was great.”