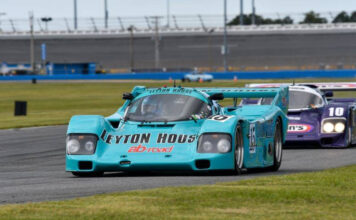 DAYTONA BEACH, Florida (October 20, 2021) – The entry list for the 2021 Historic Sportscar Racing (HSR) Classic Daytona presented by IMSA has been posted, and the seventh running of the Classic 24 Hour race at Daytona International Speedway (DIS), October 27 – 31, has attracted a stout lineup of former race winners, debuting contenders and a strong contingent of Stuttgart’s finest in support of Porsche as the official marque of this year’s event.

Debuting in 2014 at the “World Center of Racing,” the immediate success of the inaugural HSR Classic Daytona called for a second running in 2015. After a year off, the 24-Hour classic race on the 3.56-mile DIS road course returned in 2017 and is now an annual fixture on the HSR calendar.

The full weekend of vintage and historic competition next week at the “World Center of Racing” also features the HSR Daytona Historics that is part of HSR’s series of season-long sprint and endurance racing championships.

The 2021 HSR Classic Daytona presented by IMSA and HSR Daytona Historics entry lists can be found by clicking here.

Group A – 1962 – 1972: Featuring the oldest cars in the Classic 24 certain to conjure up golden memories, Group A includes legendary and early FIA-era prototype and GT machines that raced in international and world championship competition. The group has attracted race cars such as the Lola T70 and Chevron B21 and a nice mix of 1960s and ’70s production-based Porsche 911 and 914 entries that will wage a classic Porsche vs. Corvette GT battle with some big-bore Vettes of the same era. An entry to keep an eye on is the quick GMT Racing 1972 No. 8 Chevron B21 (pictured above) that John Delane drove to the Group A win in last December’s HSR Classic Sebring 12 Hour.

Group B – 1973 – 1982: It’s hard to believe the newest cars in Group B are pushing 40 years old considering the ultra-quick sports prototypes and turbocharged, wide-body GT cars in this class still deliver maximum thrills on track. This year’s Classic 24 will be no exception with Chevron B26 and B36 models set for a sports prototype clash with a Lola T294. On the GT front, a pair of Porsche 935 tribute cars go up against an IMSA GTO Camaro, two BMW CSLs and several Porsche 911 RSR and IROC models. Two entries of note (pictured below) include Alain Rüede who returns to the Classic Daytona with his 1982 No. 21 Chevrolet Camaro IMSA GTO car for the first time since stepping up to score the overall Group B win in 2019. The other is the 1974 No. 9 Porsche 911 RSR of Jack Lewis who marks his 50th year of competition at Daytona after debuting at the “World Center of Racing” in a 1971 IMSA support race.

Group C – 1983 – 1993: Group C appropriately showcases the mighty Group C and GTP era of the mid-1980s and early ’90s. Some true racing treasures are always part of this group, and this year’s gems include GTP Jaguar XJR-5 and XJR-16 entries and two iconic Porsche 962s ready to pick up their battle for the Group C win from last year. A mass of Porsche 944 Turbo and S models are also in the mix, with many pulling double duty at Daytona competing in the Classic 24 and the weekend’s Inaugural HSR Street Stock Road Racing and RS/International Sedan Reunion. The headline bout (pictured at top), however, will be Angus Russell in his 1985 No. 15 ex-Kremer Brothers/Leyton House Porsche 962C prepared by Amalfi Racing and the pristine purple ex-Wynn’s/Hotchkis Racing 1986 No. 10 Porsche 962 of Joe Robillard and Robillard Racing. Russell scored the overall Group C win last year but Robillard returns fully focused on taking this year’s Group C crown.

Group D – 1994 – 2003: Sharing the track with Group C, competing entries in Group D include historic yet familiar prototypes and European and American-made GT cars. Group D is open to first-generation Daytona Prototypes and features some of the coolest production-based GT machines from the 1990s. Former winners returning to the Classic 24 include Forest Barber and Terry Borcheller in Barber’s 2003 No. 54 Doran JE4 Daytona Prototype they co-drove to the Group D win in their last HSR appearance at Daytona in 2019. That victory came 15 years after Barber, Borcheller, Christian Fittipaldi and Andy Pilgrim drove the Doran to the overall victory in the 2004 Rolex 24 At Daytona. Another returning winner is the flame-throwing Sundry Racing 1995 No. 5 Oldsmobile Aurora GTS of Steve Cohen that broke through for the overall Group D win in the 2018 HSR Classic Daytona presented by IMSA.

Group E – 2000 – 2018: This blue-chip Group lets ALMS and Le Mans prototypes not eligible to race at Daytona in their prime get a chance to compete on the 3.56-mile high-banked road course. The largest group in the Classic 24, Group E may also produce the biggest and fastest battle of the race. David Porter is shooting for his third straight Classic 24 Group E victory in his GMT Racing 2007 No. 7 Peugeot 908 HDi FAP (pictured above) but faces the formidable challenge of a familiar car and competitor. Juan Gonzalez now owns and campaigns the ex-Rollcentre Racing 2007 No. 18 Pescarolo-Judd which both he and Porter, the car’s previous owner, have driven to combined HSR Classics victories at Daytona and Sebring. The Peugeot and Pescarolo will compete against a Lola B12/80 and a packed field of modern GT cars recently retired from contemporary competition. Among the GT notables is the Speed Works 2016 No. 71 Lamborghini Huracan Evo IMSA Super Trofeo series car of Greg Griffin (pictured below). The IMSA Lamborghini series does not compete at Daytona, so Griffin will be the first to give this specification of Huracan EVO some competitive laps on the DIS road course.

Group F – 2000 – 2018: Group F showcases modern Prototype and GT race cars just a few years removed from their contemporary competition prime. The division is home to the popular Oreca FLM09 Le Mans Prototype Challenge (LMPC) “PC” cars and Gen 2 and Gen 3 Daytona Prototypes “DP” cars no longer eligible for current IMSA competition. William Hubbell, Robert Tornello and JC France should be among the pacesetters in their Corvette Daytona Prototypes, but the trio could be challenged by the 2010 No. 54 Oreca FLM09 PC entry of Chris Ronson. A GT standout is the returning Doran Racing 2005 Ford GT Mk7 for Brad Jaeger, who co-drove to a B.R.M. Endurance Challenge GT Modern (GTM) victory in the Ford GT last year in the Daytona Historics.

Group G – HSR Cars: Group G is home to HSR classes not represented in the other groups. Offering a mix of primarily production cars from six different decades of competition, Group G includes many of the same teams and race cars that compete in HSR’s Vintage GT and Historic GT groups and the HSR Classic RS Cup and HSR Stoner Car Care Global GT series. Porsche models from all generations make up the majority of the entries, but several BMWs and Camaros will battle with a Lotus Exige, a “1965” Cobra Challenge replica racer and even a trio of Volkswagen GTI and Audi RS3 front-wheel drive TCR touring cars. Among the returning entries is 2019 Group G winning co-driver Todd Napieralski and his 2016 No. 39 Chevrolet Camaro SS.

A competitor test day on Wednesday, October 27, kicks off the 2021 HSR Classic Daytona presented by IMSA. The full-day test sets the stage for the following four days of official competition, which culminates with the classic 24-hour race from Saturday, October 30, at 1 p.m. EDT straight through to the final checkered flag 24 hours later on Sunday, October 31.

Spectator tickets for the HSR Classic Daytona can be purchased at DIS Gate 40, off of Williamson Boulevard, beginning Thursday, October 28 at 7:30 a.m. EDT. A variety of single day, two-day and three and four-day weekend passes are available for purchase as well as RV and tent camping options and parking passes. Learn more at www.HSRTickets.com.

The 2021 HSR Classic Daytona presented by IMSA entry list can be found by clicking here.
About HSR: Historic Sportscar Racing (HSR) was formed in the mid-1970s with an event at Road Atlanta. There was one goal then and it remains true today: to celebrate the race cars from the past. As a “time machine” of sights and sounds, HSR provides a venue for competitors and spectators alike to share in the wonderful history and excitement created by the cars that competed at race tracks around the world. HSR currently sanctions eight vintage and historic racing events at some of the world’s most renowned race tracks, including Road Atlanta, Sebring International Raceway, Daytona International Speedway and more. The complete schedule and full event information can be found on HSR’s website at www.HSRRace.com. Look for the HSR Channel on YouTube and follow HSR on Facebook at www.Facebook.com/HSRrace/ and on Twitter and Instagram at @HSR_race. A dedicated website for the Classic 24 Hour at Daytona presented by IMSA is available at www.Classic24hour.com.