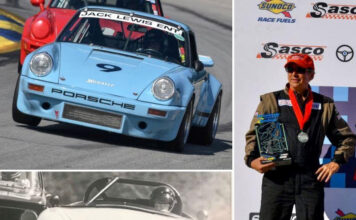 Lewis debuted at Daytona in 1971 at the age of 21, driving a 1955 Porsche Speedster in an IMSA support race. It was the first of a string of ongoing visits to the high-banked road course over the next five decades that have seen Lewis amass a solid record of success in both contemporary and vintage and historic racing competition at DIS.

Driving his Jack Lewis Enterprises 1974 No. 9 Porsche 911 RSR (pictured at top), Lewis competes in both the HSR Classic Daytona this Saturday and Sunday and the accompanying HSR Daytona Historics events that set the stage for the classic 24-hour race from Thursday on.

“All of us at HSR want to congratulate Jack and his wife Helga Lewis (pictured with Lewis above in 1991) on 50 years of racing at Daytona International Speedway and an amazing competition career that shows no signs of slowing down,” said HSR President David Hinton. “Jack debuted at Daytona in 1971 at the age of 21 and returns for his 50th Anniversary at Daytona in the HSR Classic 24 at the age of 71 in ’21! He is still a threat for the podium every time he takes a green flag, and we are honored to know and race with Jack at HSR. He is a credit to sports car racing competition at every level.”

Lewis’ Golden Anniversary is fittingly framed by the famous Porsche Gold Crest on a weekend that also celebrates Porsche as the Featured Marque of the 2021 HSR Classic Daytona. The Norcross, Georgia resident has driven nothing but Porsches at Daytona the last 50 years.

“The 50 years went by in no time, but at times it was dreadfully hard to keep it going,” Lewis said. “I’m most grateful to my wife, Helga, for supporting all my efforts and for my good health and having the abilities that allow me to do this. Looking back and now, I’ve always been able to live my dream.”

In addition to vintage and historic racing achievements, Lewis has an accomplished resume of contemporary competition success and race wins at Daytona. He ran four Daytona 250 night races in the Grand American Road Racing (Grand-Am) era in the early 2000s, boosting his total professional starts at Daytona to 22.

“My most memorable race at Daytona (pictured above) was the Daytona 250 on the July 4, 2002 weekend with NASCAR,” Lewis said. “The Grand-Am sports car race was on Friday night after NASCAR Cup qualifying. I started next to Tony Stewart and won the GT race. My son, Mike, was the rear tire changer. It was our second Grand-Am win in our Porsche GT3, having won the Watkins Glen 6 Hour the week before. All a dream come true for me!”

Lewis returned to Daytona for the 24 hour in 1992 through 1998 driving Jack Lewis Enterprises prepared Porsches, except in 1995 when he drove for Alex Job Racing. In 1999, he drove with fellow HSR standout Kevin Wheeler in a JLE/KMW Motorsports prepared Porsche RSR. He also partnered in Rolex 24 efforts with David Murry (2002), fellow HSR competitor Tom McGlynn (2004) and Steve Bernheim (2005).

Lewis was the 1995 IMSA Driver of the Year in addition to garnering HSR Driver of the Year honors in 1991 and a full 20 years later in 2011. The first HSR driver honor was fueled in part by Lewis winning the inaugural Vintage Rolex Endurance Championship in 1991.

Lewis’ most recent podium appearances in HSR feature races were earned just last month in the HSR Fall Historics at Michelin Raceway Road Atlanta. He drove the No. 9 RSR to second-place overall and Porsche-class finishes in that event’s HSR Sasco Sports International/American Challenge race and another runner-up honor in the HSR Classic RS Cup race.

This weekend marks the fourth HSR Classic 24 start for Lewis, all in his IROC-themed 1974 No. 9 RSR, which is a continuation of the same Porsche he made his Rolex 24 debut in nearly 40 years ago in 1982.

Debuting in 2014 at the “World Center of Racing,” the immediate success of the inaugural HSR Classic Daytona called for a second running in 2015. After a year off, the 24-Hour classic race on the 3.56-mile DIS road course returned in 2017 and is now an annual fixture on the HSR calendar.

A competitor test day on Wednesday, October 27, kicks off the 2021 HSR Classic Daytona presented by IMSA. The full-day test sets the stage for the following four days of official competition, which culminates with the classic 24-hour race from Saturday, October 30, at 1 p.m. EDT straight through to the final checkered flag 24 hours later on Sunday, October 31.

Information on the 2021 HSR Classic Daytona and the accompanying HSR Daytona Historics, including the event schedule and much more, can be found by clicking here.

Spectator tickets for the HSR Classic Daytona can be purchased at DIS Gate 40, off of Williamson Boulevard, beginning Thursday, October 28 at 7:30 a.m. EDT. A variety of single day, two-day and three and four-day weekend passes are available for purchase as well as RV and tent camping options and parking passes. Learn more at www.HSRTickets.com.

The 2021 HSR Classic Daytona presented by IMSA entry list can be found by clicking here.

Official Release
Previous articleColored Exhaust from your Car: What does it mean?
Next articleM&M’S Halloween Racing: Kyle Busch Martinsville Advance