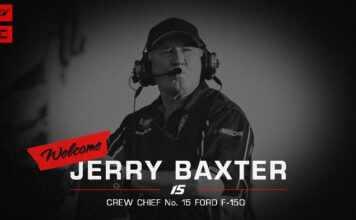 Baxter to Guide Tanner Gray in 2022

﻿MOORESVILLE, N.C. (November 11, 2021)—David Gilliland Racing (DGR) announced today that long time crew chief Jerry Baxter will join the team to lead the No. 15 NASCAR Camping World Truck Series (NCWTS) entry with driver Tanner Gray for the 2022 season. Baxter brings a wealth of knowledge to the young NCWTS team with over 35 years of experience in NASCAR.

The 2022 NCWTS season will mark Gray’s third full-time year, and first under the guidance of Baxter. Baxter returns to the NCWTS after spending the last two seasons as a crew chief in the Cup Series. In his NCWTS career, the California native has 16 wins, 59 top-five and 104 top-10 finishes, and 10 pole awards. Most recently in the NCWTS, Baxter guided Brett Moffitt to four wins in 2019.

“Jerry’s passion and history with the Truck Series will be a great addition to DGR,” said David Gilliland, co-owner of David Gilliland Racing. “His experience will be able to provide Tanner with the tools he needs to be a successful driver.”

Baxter’s experience in the NCWTS dates back to 1998 with driver Boris Said at Sonoma (Calif.) Raceway. Said started from the second position and went on to win the event after leading 47 laps under Baxter’s tutelage. Throughout his NASCAR career, Baxter has called 84 Cup Series and 194 Xfinity Series races in addition to 186 NCWTS races.

“I’m thrilled to be joining DGR and working with Tanner,” said Jerry Baxter, No. 15 crew chief. “Tanner is a great young man and he’s eager to perform well behind the wheel. I’m looking forward to working with him and helping him get to the next level.”

Baxter’s first on-track activity with Gray is scheduled to be at the NCWTS manufacturer’s test at Atlanta Motor Speedway on December 6.

“I can’t wait to work with Jerry,” said Tanner Gray. “He has a lot of experience across the sport and a proven track record in the Truck Series. I’m still learning week in and week out, so it will be nice to have consistency next season with a veteran voice in my ear. I’m excited to work together to get the No. 15 Ford Performance F-150 running up front where it belongs.”

The opening 2022 NCWTS race at Daytona (Fla.) International Speedway will be televised live on FS1 at 7:30 p.m. ET on February 18.