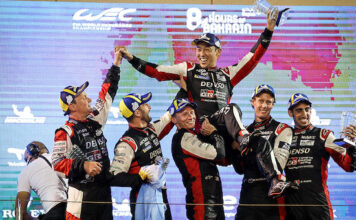 TOKYO, Nov 12, 2021 – (JCN Newswire) – TOYOTA GAZOO Racing completed its history-making Hypercar season in style with a one-two victory in the 8 Hours of Bahrain on a day of destiny for the 2021 FIA World Endurance Championship (WEC) drivers’ crown.

An emotional finale to the WEC season saw Kazuki Nakajima bring the curtain down on his glittering endurance career in fitting style with victory in the #8 GR010 HYBRID he shares with Sebastien Buemi and Brendon Hartley.

Le Mans winners Mike Conway, Kamui Kobayashi and Jose Maria Lopez, in the #7 GR010 HYBRID, retained the drivers’ title by finishing Saturday’s race, the sixth and final round of the season, in second place.

Both GR010 HYBRIDs displayed a tribute to Kazuki, who has earned his status as an endurance racing legend by winning Le Mans three times. He took 17 victories from his 59 WEC races and won the 2018-2019 World Championship title alongside Sebastien and Fernando Alonso.

On a day of new milestones, TOYOTA GAZOO Racing became the first team to win every race in a WEC season. It extended its unprecedented winning run to nine, in its 70th event since entering the series in 2012. Last week’s victory in Bahrain meant it had already secured its fourth teams’ World Championship.

Despite clean sweeps in all sessions of the Bahrain double-header, the GR010 HYBRIDs played catch-up on the opening laps when the #36 Alpine stole an early lead. But some exciting wheel-to-wheel racing put the GR010 HYBRIDs back in front and they never looked back.

As the race moved into the night, the #8 car established an ever-stronger grip at the front, edging clear of the #7. In the sixth hour, the lead was reduced slightly when a replacement steering wheel was required for the #8, following occasional gearshift issues. That cost only a few seconds at a scheduled pit stop, which rectified the problem.

Kazuki took the wheel of the #8 car for the final stint, and his last laps in WEC. A journey which started with the roll-out of the TS030 HYBRID in January 2012, ended when Kazuki took the chequered flag to win by 7.351secs from Jose, whose second place delivered another world title to the #7 crew.

The racing season may have ended but the action in Bahrain continues on Sunday, when seven-time World Rally Champion Sebastien Ogier will drive a GR010 HYBRID for the first time in the WEC rookie test. Rising LMP2 star Charles Milesi will also test for the team.