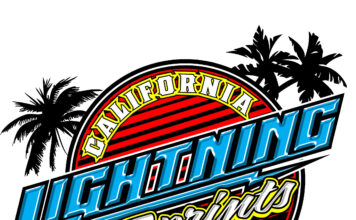 (Upland, CA, November 17, 2021) AJ Bender scored a $1,000.00 win in Tuesday night’s “5th Annual Western States Lightning Sprint Car Championship.” The victory was the fourth CLS win of the season for the veteran San Diego driver and his second at the Bakersfield Speedway. In addition to Bender’s win, rookie David Gasper finished third in the main event and that sewed up the championship in the four race “Civil War Series.”

On a track that was lightning fast all night long, Bender got off to a good start when he out qualified the 26-car field with a lap of 12.785. Santa Barbara’s Gasper turned in the second fastest time in qualifying with a 12.928. Teenager Grant Sexton, Bender’s teammate at Sexton Gatlin Racing, was third quickest at 13.016.

With 26 cars on hand, the field was split into three heat races. The heats were all eight laps and the top five finishers from each went straight into the 25-lap main event on “The West’s Fastest 1/3 Mile High Banked Clay Oval.” Lakeside’s Brent Sexton captured the first heat race over Kingsburg’s Doug Nunes, who was subbing for Cody Nigh in the #45 car. Five time series champion Bobby Michnowicz of Oak Hills, Bender and Colorado Springs, Colorado star Chris Crowder took the other three transfer spots.

Disaster struck for Greco on his slowdown lap after the victory when his car came to a stop on the track. Not only was it a fiasco for the night, but potentially a catastrophe for the season. The teen came into the race only 12 points out of the lead in the championship standings with four events to go. He also led Gasper by one point going into the final night of the “Civil War Series.”

With the first 15 spots in the main event secure, 11-cars took to the track for the 12-lap B main which would reward the first seven finishers with a ticket to the A main. The drivers who earned their spots into the A main from the 12-lapper were Dominic Del Monte of Gardena, Woodcrest’s Don Hart, Placerville’s Terry Bergstrom, Brandon Leedy of Lake Elsinore, Rutherford’s Dakota Albright, James Turnbull of Indio, and Jeremiah Franklin.

There was still one more item of business to take care of before the main event. That was the dash for the six fastest qualifiers who transferred from the heat races. The way they finished the six-lap race is the way the first three rows of the main event would start straight up. The dash was all Chiaramonte. The 14-year-old racing sensation dominated the six lapper and earned the right to start on the pole for the main. Kinney placed second, Grant Sexton finished third, Gasper claimed the fourth spot with Crowder 5th, and Bender sixth.

One change for the main event came when Greco’s #8 could not be repaired for the green flag. “Rockstar” Jon Robertson generously loaned his #42 to the teen so he could start the main. However, the driver car switch meant that instead of starting eighth, Greco had to start dead last in the 22-car field.

The second go to start the race was a success and Chiaramonte jumped into the lead over Kinney and Gasper. It immediately became apparent which car was the fastest on the track and that was Chiaramonte. The teen drove away from his pursuers like it was chained to the crashwall!

By the end of the fifth circuit, Chiaramonte was a half straight ahead of his pursuers and one lap later, he was into lapped traffic. What he was missing behind him was fierce battles between Kinney, Gasper, Grant Sexton and Bender.

Bobby Michnowicz started alongside his son Kevin in row seven in the main event. The recently turned 58-year-old was the second car out of the race when he pulled to the infield on lap 11. One lap later Kevin slowed and brought out a yellow when he could not get his car off the track. They finished 21st and 20th respectively.

When the race resumed, Chiaramonte was at the point, and he had two cars between himself and second place Gasper. Kinney, Bender and Crowder made up the remainder of the top five. Once again, Chiaramonte left the competition behind when the green light came back on. Gasper took Kinney for the runner up spot on the restart. However, the real fun began on lap 14 when Bender went from the 4th place spot all the way up to second by passing Kinney and Gasper.

Once Bender got by Gasper, the crowd got its full admission price worth of excitement in the next 5 laps. Bender and Gasper staged one of the most memorable battles in recent CLS history. Gasper, in his bright blue #18 raced back into second on the 15th lap. Over the next three circuits they battled back and forth for the runner up spot. That crowd pleasing battle pulled the attention away from Chiaramonte who by that time, had a full straight away lead, but he was about to get a big, unpleasant surprise.

The reason Chiaramonte was so far ahead of the competition was quite simple. He was way faster than everyone else! In fact, his fastest lap in the CLS main of 12.426 was also faster than any of the USAC Midgets turned in their main. However, it all went for naught on lap 18! Entering turn number one, a puff of smoke came out of the engine, and he slowed. Suddenly smoke was billowing from the car and a flash oil fire broke out as he was coming to a stop. The fire went out but briefly flared back up as he was climbing out. His spectacular drive was over, and it was extinguished by a spectacular ball of flames. The fans gave the young driver a nice round of applause as he went back to the pits in recognition of his demolition of the competition in the dash and the first 17-laps of the main event.

Bender was at the point for the restart after Chiaramonte’s fiery exit from the race. Gasper was in second with Crowder, Kinney and Dyer making up spots three through five. Bender got a tremendous restart and was going to be very hard to catch in the remaining 7 laps.

As Bender moved away, the trading of positions was still going on behind him. Coulston, who started in 12th, put all the fans on the edge of their seats by dramatically going from sixth to fourth on lap 19. Unfortunately, he broke on the last lap and ended up 15th.

Crowder moved up one spot on lap 20 when he passed Gasper, but he could not stop the streaking Bender from his fourth win of the year. Gasper hung on for third with Kinney and Dyer rounding out the top five.

“That sucks for Braden (Chiaramonte),” was the first thing Bender said to the crowd when interviewed after the main event. “He is something special. A good kid and a good friend. I love this place and this thing is a rocket ship (his car). It is so fast, and I am lucky I get a chance to drive it. Thanks to Sexton Gatlin Racing for the chance. Hopefully, we can go to Placerville and do it three more times. I think my chances are good.”

The wild happenings in the night saw a big shake up in the season long championship standings. Gasper, who began the evening in third 28-points out of first, took over the lead for the first time this year. Turnbull, who came in as the point leader, slipped back to second and is now 13-points behind Gasper. Greco dropped from second back to third. Dyer maintained the fourth-place spot with Bender catapulting from seventh up to fifth.

Gasper came into the night trailing Greco by one-point in the last “Civil War Series” event of the year. His third-place finish combined with Greco’s early exit from the main gave the title to the first year Lightning Sprint driver. Turnbull was 51 behind in second. Greco ended up third. Leedy was the top BCRA driver in fourth with Dyer coming home fifth.

The CLS gets Wednesday off to travel north to the Placerville Speedway for the Thursday, Friday, and Saturday “Hangtown 100.”

Fans can find the Placerville Speedway at 100 Placerville Drive in Placerville (95667). The grandstands will open at 3:00 PM each day with racing at 6:30. The website for the track is at the following link https://www.placervillespeedway.com/. The office phone is (530) 344-7592.

Fans around the world who cannot attend the races, will be able to watch all four live on The Flo Racing PPV site at https://www.floracing.com/

The CLS would like to thank 2021 series sponsors Hoosier Tires, T Shirts By Timeless, TJ Forged Racing Wheels, and Walker Performance Filtration. If you or your company would like to become part of the series, please call Alex Grigoreas at (909) 437-3170.