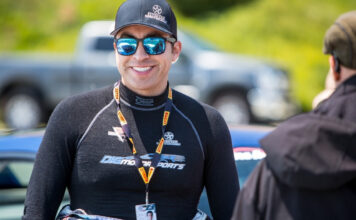 Honolulu, HAWAII – November 17, 2021 – 2019 Trans Am West Coast GT Class Champion Roger Eagleton has just been reclassified by the FIA as a Bronze license driver in a move that the Northern California and Honolulu based Real Estate entrepreneur believes will open up more opportunities for him to race in 2022 and beyond. The license issuing body the FIA – Federation International Automobile – is the ultimate authority and governing body for all motorsports worldwide and upholds the highest standards of professionalism and safety. While reclassification with a bronze license is technically a downgrade from Roger’s previously held silver license, in fact it opens up a whole raft of new opportunities for a pilot proven to be as competitive as Roger. Many Prototype, Sportscars and GT programs require a bronze and silver or two bronze drivers, hence the paradoxical increase in opportunities.

We spoke to Roger last week about the announcement and how he plans to use the reclassification to his advantage, “Normally a ratings downgrade isn’t a cause for celebration. But in my case, I am very happy and thankful that the FIA Driver Categorization Committee has evaluated my existing silver ranking and moved me to the bronze category as I feel that this new bronze ranking will allow me more opportunities to partner with teams and drivers in need of a fast, safe and consistent bronze driver to complete their line-up for 2022 and beyond.”

Roger explained the situation further when he added, “I also believe that this driver categorization change will allow my existing long-term sponsors to obtain an even higher return on their continued investment in my career as I will now have additional avenues in which to deploy my funding, with the goal of reaching an ever-wider audience of sportscar fans both nationally and internationally.”

The talented and ambitious Eagleton went on, “Our goal for 2022 is to obtain a full season partnership with a team at the national or international level and to win a championship. Ideally with a GT car or a prototype, sprint races or endurance, I just want to be out there, providing value for my sponsors and entertaining fans both in person and on TV because as a driver, that’s what truly makes me happy.”

A graduate of CSU Bakersfield, Roger first competed in motorsports back in 2008 in the Jim Russell Championship Series where he finished fifth overall and the same year was Sports Car Club of America San Francisco Region BMW E30 Class Champion.

By 2018 Roger had established himself on the West Coast Sportscar Racing scene and that year he won the T2 class in the SCCA Majors at Thunderhill and at Kent, Washington. He also won at Buttonwillow and Portland in the SCCA T2 class in the Hoosier Super Tour, results that made him the Western Conference Class Champion in the T2 class. He also made select appearances in the IMSA Continental Tire Series (now Michelin Pilot Challenge), subbing for Alexandre Premat and driving a Mercedes AMG GT-4 alongside team owner and co-driver Mark Ramsey.

In the 25 hours of Thunderhill he was first in the EXR class. The following year saw Eagleton step up again, this time competing in the iconic Trans Am Series. He competed very successfully in the West Coast Championship GT class. Roger led the Championship after winning at Thunderhill in April that year and then finished second at Laguna Seca, Sonoma and Portland. He secured the 2019 Championship after finishing runner up at the hugely challenging, Formula One designated Circuit of the Americas.

Fast, safe and reliable, Roger is the ideal candidate for a variety of racing, Muscle Car and Endurance Racing programs. Contact him through his website at Roger Eagleton Racing.