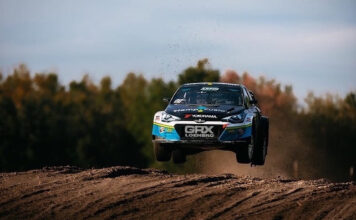 Starke, FL – After 5 rounds spread across the United States, GRX Loenbro concluded the 2021 Nitro Rallycross season this past weekend in Florida.

Held at Florida International Rally Motorsports on the property of Hickory Regional Airport, the event provided drivers with a mixed surface for which to compete. Utilizing old taxiways and run off areas of the old airport, NRX created a long high speed track for the season finale.

Following practice sessions 1&2 Saturday morning, the GRX Loenbro team worked to make changes and find additional speed around the course. Looking at head to the Battle Brackets later in the day, the team knew that the weekend was going to be challenging as the track utilized the most tarmac sections out of any track visited throughout the season.

Battle Brackets began with Steve Arpin taking a round 1 win over Liam Doran, pitting him up against Scott Speed in round 2. Round 2 began as both Arpin and Speed left the start line and powered to turn one. Entering turn 1 on the outside, Arpin pushed wide and ended up on the grass runoff area as Speed pulled away. Unfortunately due to this small error, Arpin had lost too much time and regardless of what he did he was unable to catch Speed ending Day 1 of competition.

Day 2 began with Heat Races. Lining up on the inside of Row 2 next to Chase Elliott, Arpin launched off the line and began his push to the front passing Oliver Erickson. As the race progressed Arpin worked on reeling in Timmy Hansen however he did not have the necessary pace needed to make the pass and get into P1. As a result Arpin was forced to race the semi-final.

Starting on the front row of the semi-final, Arpin battled with Oliver Erickson going into turn 2. The two pushed wide and Arpin was sent off the side of the jump resulting in a red flag, cars where then sent back to restart the race. After another Red Flag due to an incident involving Liam Doran, Arpin was able to lead from the Green Flag to the Checkered Flag, putting him into the final.

As the lights went green for the final race of 2021, Arpin held back to avoid damage as 8 cars powered towards turn 1. Getting caught up slightly behind a few cars bumping and banging Arpin took then gap jump on lap one and settled into P3. Giving it everything he had, Arpin powered the GRX Loenbro HempFusion #00 around the track. It wasn’t until Arpin took the joker lap on the last lap that he fell back to P7 after having to slow up slightly to merge back onto the racing line. In the end Arpin crossed the line 7th solidifying a P5 in Championship points.

“Overall I’d say this season was a success. We made it to the final at every round of the championship and I think they says something about this GRX Loenbro group. Yes, we had ups and downs. But, we never stopped fighting regardless of the challenges that were thrown at us, we worked together and overcame each one. I am proud of what we’ve accomplished this season and excited to continue to develop the relationship we’ve established with GRX. Looking to the future, Nitro Rallycross has a plan in place to succeed and I am looking forward to seeing how things plays out over the coming months.” – Steve Arpin

“The track at The FIRM was very different to what we had raced on so far in Nitro RX this season, but Steve and the team adapted to the change well and we were strong on race day, especially in the semi-final and the early laps of the final. On the different day we might have ended up with a podium here, but it didn’t play out like that this time. Still, we maintained our record of being in the final in every round. All of the boys in the team worked very hard this weekend, including a late evening on Saturday, and they can be proud of what they have been a part of this year. It’s been a good season, it’s been a pleasure to work with Steve and his team as a combined effort with GRX and most importantly, I think we all had a lot of fun. Now let’s see what the future holds.” – Jussi Pinomaki

About Loenbro Motorsports
Owned by brothers Paul and Jon Leach, Loenbro Motorsports is the racing team division of Loenbro, a successful industrial construction and services company. Loenbro provides single-source solutions for industrial customers from coast to coast. Its reputation for exceptional performance and a strong work ethic has helped fuel its growth since it was founded in 1998. For more information, visit www.loenbro.com.

About GRX-SET World RX Team:
GRX, led by two-time World Rally Champion Marcus Grönholm, made its maiden full-time foray into the FIA World Rallycross Championship in 2017, having previously run Niclas Grönholm to Finnish Rallycross Championship glory in 2015. Building on that solid foundation, GRX evolved into a full-blown, two-car World RX team with a pair of newly built Hyundai i20s in 2018. Since, the team has scored a best overall result of second in the World RX Teams’ Championship in 2019. The team has also claimed four World RX outright wins, three with Niclas Grönholm in Norway and South Africa in 2019 and Finland in 2020, and with Timur Timerzyanov in Belgium 2019.