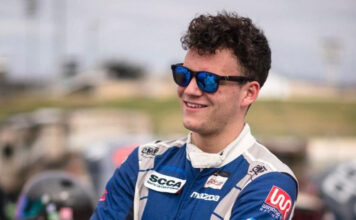 Fassnacht to Drive the No. 15 Sword Peformance Mazda MX-5 for McCumbee McAleer Racing Beginning this Week at Daytona International Speedway

Fassnacht will drive the full 14-race season in the No. 15 Sword Performance Mazda MX-5 for championship-winning McCumbee McAleer Racing. The season-opening doubleheader from Daytona runs this week in advance of the famed Rolex 24 At Daytona, with 45-minute races at 5:30 p.m. EST on Thursday, January 27 and 10:15 a.m. EST on Friday, January 28. Both races can be streamed live at IMSA.tv.

Daytona is the professional debut for the Boston College freshman, who was a contender in 2021 for the club-level Spec MX-5 championship for the previous generation Mazda MX-5.

“Racing with McCumbee McAleer Racing has been a goal of mine since the beginning of my career, so signing that contract was pretty much a dream come true for me,” Fassnacht said. “Sword Performance, who have engineered clean and clear hydration products to keep any athlete, including myself, on top of their game is on board for a full season with myself and the No. 15 MX-5 Cup car, and I could not be more excited. It is an honor to represent a brand that is revolutionizing the performance beverage industry, especially when motorsports is such a fitting place for Sword to advertise their great products.”

Unlike many drivers these days, Fassnacht didn’t start his driving career in karting. Instead, he shadowed his father, Matt Fassnacht, through professional racing paddocks until getting on track for the first time at 15-years-old at Monticello Motor Club. From there, Fassnacht’s meteoric rise ran through the Mazda platform, beginning with SCCA Spec Miata, 2021’s Spec MX-5 effort, and now the newest challenge, IMSA Mazda MX-5 Cup.

“Mazda MX-5 Cup offers some of the tightest and most competitive racing on the planet, and I can’t wait to be a part of the series,” Fassnacht said. “We saw some crazy finishes last year at tracks like Daytona where the margin of victory was 0.238 of a second combined in both races, and I’m sure history will repeat itself in 2022. The talent in the field is particularly deep this year, especially in the rising rookie class, but I am confident that MMR and I will put the No. 15 Sword Performance MX-5 in the right position race for wins and podiums.”

While Fassnacht doesn’t have any MX-5 Cup starts under his belt, his MMR team tested at Daytona a month ago. That helped lessen the learning curve coming into the season.

“Daytona is an iconic track in North American racing for a reason,” Fassnacht said. “For how simple the layout is, there is so much character in every section. The three days I spent testing with MMR at Daytona in early December are going to prove crucial come race day, as I feel really comfortable in a new car at a new track for me. Bump drafting is something I’ve done my whole career, but I’ve never been hooked up the way I was with my teammates during testing. It took some getting used to, but I believe I’m ready to use what I learned to my advantage.”

Despite the deep level of competition, Fassnacht enters the season with a combination of realistic and high expectations, well aware that his ultimate goal will require hard work.

“My goal for the 2022 Mazda MX-5 Cup Series is to win the championship,” Fassnacht said. “I know that is a lofty goal, especially for a rookie, but I’m not showing up to be second best. Obviously, my career is young and I still have a lot to improve upon, so I’ll also be looking to get better each weekend and learn from the talented drivers around me. But, just like everyone else in the series, I am there to win. With all of the work MMR and I have done this off-season and with the support of Sword Performance, I think we are in a good position to make some noise at Daytona.”

The Idemitsu Mazda MX-5 Cup was on track for the first time in 2022 with a 30-minute practice session on Wednesday, January 26 at 3 p.m. EST. The championship returns to practice once more on Thursday morning prior to a 20-minute qualifying session at 12:55 p.m. EST, followed by the 45-minute season opener at 5:30 p.m. EST. The race event concludes before the weekend arrives at Daytona, with the second 45-minute race at 10:15 a.m. EST on Friday, January 28. Both races can be seen live at IMSA.tv.

A second-generation professional racecar driver, 18-year-old Aidan Fassnacht is conducting the 2022 Idemitsu Mazda MX-5 Cup for McCumbee McAleer Racing (MMR) in the No. 15 Sword Performance Mazda MX-5 Cup. Fassnacht, a freshman at Boston College, raced a Spec Miata in Regional and National Sports Car Club of America events for two seasons before taking on the Spec MX-5 Challenge in 2021, earning a slot in the prestigious Mazda Shootout before signing with MMR for his 2022 rookie campaign.