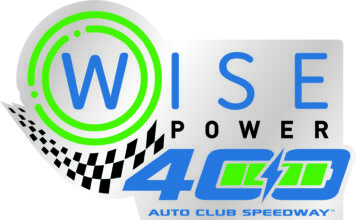 The NASCAR Cup Series season continues next weekend at Las Vegas Speedway with the Pennzoil 400 on Sunday, March 6, at 3:30 P.M. ET. Live coverage can be found on FOX, PRN and SiriusXM NASCAR Radio Channel 90.

KYLE LARSON, NO. 5 HENDRICKCARS.COM CAMARO ZL1 – Race Winner
KYLE, IT DOESN’T MATTER THE CAR, IT DOESN’T MATTER THE TRACK – YOU JUST GET IN IT, YOU GO FAST. YOUR SECOND CAREER VICTORY AT AUTO CLUB SPEEDWAY.
“Yeah, thanks. It’s always fun here to win in the home state. Hard work all weekend there. Didn’t feel great in practice yesterday.

“Cliff (Daniels, Crew Chief) and everybody made some good adjustments overnight, and the car handled a lot better. There were definitely some guys that were quicker than us, but they had their misfortunes. Just kept our heads in it all day. Long race. Just restarts were crazy. The whole runs were crazy.

“Definitely wild but cool to get a win here in California and hopefully get on a little streak.”

AUSTIN DILLON, NO. 3 DOW COATINGS CAMARO ZL1 – Finished 2nd
“Huge credit to the Lord and our pit crew. Man, they were unbelievable all day. They kept us in this race. We had to make a bunch of adjustments. We were terrible at the beginning. Just kind of learning the car myself and then communicating with Justin (Alexander, Crew Chief), we just made it better and better. We got a lot of great partners on this Dow Chevrolet. I have to thank American Ethanol, everybody that helps make this possible.

“The pit crew was the story of the day today. They were special. And my teammate (Tyler) Reddick – he balled out all day up there against the fence. I hate it for him what happened to him and I felt like if we didn’t get up there and get after it for them, it would be a let down for RCR. So, glad to get P-2.

“I made a run at him off of (turn) four. I don’t know if I should have ran the bottom. We could really get into turn one pretty good and rotate the bottom better than some guys. But man, that was a fun race. I’m impressed.”

ERIK JONES, NO. 43 FOCUSFACTOR CAMARO ZL1 – Finished 3rd
YOU STARTED THE DAY IN SECOND. RAN UP FRONT ALL DAY LONG; LEADING LAPS. THE STRONGEST WE’VE SEEN THE NO. 43 CHEVROLET IN QUITE SOME TIME. HOW GOOD DID IT FEEL TO RUN UP FRONT ALL DAY?
“It was good. It feels good to be interviewed after the race, too. It’s awesome, but it’s frustrating too. You’re that close and you have a car that you feel like can do it. The No. 43 FOCUSFactor Chevrolet definitely had it today. It was a matter of getting up front and taking advantage of clean air, and we did that a couple of times. A couple restarts just didn’t go our way. I probably could have done a better job here and there, and it just didn’t add up. I just haven’t raced up front a lot in the last year and a half. There are some things I need to be better at. Hopefully I have a lot of time to work on that. We want to keep running upfront and if we keep doing that, we’re going to win some races.

“I’m really proud of this whole group. It’s been a big off season with the merger and everything we’ve done, so this is a very satisfying run for everybody and I just hope we can keep going.”

DANIEL SUAREZ, NO. 99 FREEWAY INSURANCE CAMARO ZL1 – Finished 4th
DANIEL SUAREZ GAVE IT A VALIANT EFFORT, WAS LEADING WITH THREE LAPS TO GO. WHAT ARE THE EMOTIONS KNOWNING HOW CLOSE YOU CAME BUT COMING UP JUST A BIT SHORT?
“We’re going to win a few races very soon here. I just can’t thank everyone enough on my team. We had a fast car, but we went through a lot of adversity. We had a few issues. We hit the wall once. We had an issue with a diffuser.

“My pit crew, those guys are legends; it’s unbelievable. It’s the best pit crew I’ve ever had, and it’s a lot of fun to race like that. Freeway Insurance, Chevrolet, everyone that helps Trackhouse Racing out to be able to be here and perform this way. I can tell you that I’m going to work very, very hard to go to Victory Lane very, very soon.”

DANIEL HEMRIC, NO. 16 POPPY BANK CAMARO ZL1 – Finished 9th
“What a day! I felt like we had a really good car, and we were able to maintain good speed and move forward. Unfortunately, we had an issue with our shifter and lost six laps. I can’t believe we got all of them back and were even able to contend there at the end. I’m super proud of everyone on this No. 16 Poppy Bank Chevy team, My crew chief, Matt Swiderski, and everyone else at Kaulig Racing put together an incredible race car. It was really good and super fast – it was just a matter of being back on the lead lap.”

JUSTIN HALEY, NO. 31 LEAFFILTER GUTTER PROTECTION CAMARO ZL1 – Finished 23rd
“Overall it was a good race. We stayed on the lead lap and raced in the top 15 quite a bit. We made the car better with each stop as the race went on, so l’m proud of everyone the No. 31 LeafFilter Gutter Protection Chevy team for working hard all day. At the end, we were racing hard for 11th or 12th and made contact with the 12 car. It wasn’t the finish we wanted, and the car is a little torn up, but I’m happy with the performance of the car and the gains we made.”

TYLER REDDICK, NO. 8 LENOVO CAMARO ZL1 – Finished 24th
“Absolutely gutted by how our race unfolded but I couldn’t be prouder of this whole team and what we were able to do a majority of this race today. We will learn from this; we will become stronger from this and be hungrier than ever before. It was really fun having all of the Lenovo guests here today and it was really exciting to have such a strong run for them today. We will keep this momentum going to Las Vegas next week.”

ROSS CHASTAIN, NO. 1 CASA DEL SOL TEQUILA CAMARO ZL1 – Finished 29th
“To use a backup car and start the race without any laps on it was a handful. We were really loose to start and I was not sure if we’d be able to get on the other side of it. My crew chief Phil Surgen and the Trackhouse team kept changing a lot of things on the car and got the balance where I could drive it. At the beginning of the race, I was pretty worried that we were just going to be loose and slow all day. Obviously, we got a lot better and had a shot at a top-five and I messed up. I made an unforced error running around the sixth spot. I was just riding along and hit a bump wrong and didn’t catch it in time. A mistake on my part. Seeing the transition from the beginning of the race to the end, gives me a lot of hope.”

WILLIAM BYRON, NO. 24 AXALTA CAMARO ZL1 – Finished 34th
“So frustrated I made that mistake for our team today. What a fast car and we were making our way back to the front. I got loose getting under the No. 8 (Tyler Reddick) who had a flat. Thankful for such a fast car and I know we’ll be back stronger next week.”