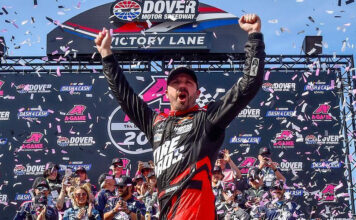 It was the first Xfinity Series victory of the season for the 31-year-old Hendersonville, Tenn., native, the third of his career and came one year after he finished second in his track debut in the Xfinity Series.

“This was one place we had circled after what we did last year,” Berry said. “To do what we did today is very special.”

Berry, driving the No. 8 Chevrolet, topped Allgaier by just over half a second, the top two drivers of JR Motorsports’ 1-2-4-5 finish.

“We’ve had some tough moments and it’s been frustrating at times,” Berry said of his season. “Racing at this level is a lot of work. You have to learn to love the work and the preparing more than the finishes.

“We knew if we kept bringing fast cars, we would find a win. We just have to keep moving the needle and getting better every week.”

“From where we were to get a top-5 finish, we’ll take it,” said Gragson, who said the bonus would be split among his pit crew. “What a day for the entire company.”

Stage 1 winner Sam Mayer led 18 laps and finished fifth, recovering from an incident where he lost his left-rear tire and was forced to make an extra pit stop. Ty Gibbs led one lap and finished third.

Allgaier led a race-high 67 laps and entered pit road with the lead on Lap 145 but came out of the pits fifth and was not able to get closer than second from there.

“That last run we were really good,” Allgaier said. “We came up a little short.”

The DuraMAX Drydene 400 presented by RelaDyne is the 104th NASCAR Cup Series race at Dover, one of only 10 venues in the country to host 100 or more Cup Series events.

TICKETS:
Kids tickets for those 12 and under start at just $10 on Sunday. For tickets to all of Dover Motor Speedway’s events, visit https://www.DoverMotorSpeedway.com or call 800-441-RACE.

Keep track of all of Dover Motor Speedway’s events by following on Twitter and Instagram or become a Facebook fan. Be sure to use #DuraMAXDrydene400 in your posts.