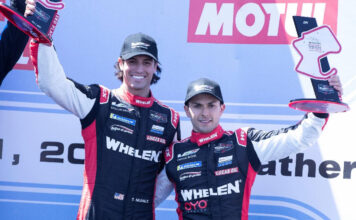 No. 31 Whelen Engineering Cadillac DPi-V.R finishes third for the fourth year in a row

The reigning IMSA DPi champion has finished third, co-driving the No 31 Whelen Engineering Cadillac DPi-V.R, in the race on the 2.238-mile, 11-turn natural-terrain road course for four years in a row. But, for accruing championship points anyway, he’ll take it and move on.

Derani, splitting seat time with first-year teammate Tristan Nunez in the 2-hour, 40-minute race slowed by one full-course caution for 18 minutes, led the Cadillac DPi contingent in the fourth round of the IMSA WeatherTech Sports Car Championship.

“I’m really happy to come out of this race with the best Cadillac,” said Derani, who also co-drove to third place in the 12-hour race at Sebring International Raceway in March.

﻿”I think we did the best we could. It’s a good points day for the team. We had to work hard on the Whelen Engineering car during the weekend. But come race day, it was very good. I’m really happy. To keep the No. 31 car on the podium here for the fourth year in a row is quite positive.”

The No. 5 Mustang Sampling Cadillac DPi-V.R, co-driven by Tristan Vautier and Richard Westbrook, finished fourth overall after earning podium spots in each of the first three races. The No. 02 Cadillac Accessories Cadillac DPi-V.R, with Alex Lynn and Earl Bamber sharing duty behind the wheel, finished fifth.

The No. 01 V-Performance Academy Cadillac DPi-V.R co-driven by Sebastien Bourdais and Renger van de Zande, which came into the race weekend off a victory on the streets of Long Beach last month, developed a power supply issue early in the race that affected major systems. The crew spent considerable time attempting to address the problem but eventually the car was retired.
Felipe Albuquerque and Ricky Taylor co-drove the winning Acura.

Another 2-hour, 40-inute race is next up for Cadillac teams and drivers on May 13-15 on the 2.258-mile, 13-turn Mid-Ohio Sports Car Course. The No. 31 Whelen Engineering Cadillac DPi-V.R has finished second the past two years at the natural-terrain road course in Lexington.

USA Network will telecast the race live at 2 p.m. ET Sunday, May 15, with streaming on Peacock. IMSA Radio will broadcast the race at IMSA.com along with XM 207.
Cadillac Racing results and quotes

No. 31 Whelen Engineering Cadillac DPi-V.R
Pipo Derani, Tristan Nunez
Finish: Third Start: Sixth
Pipo Derani: “After we had the yellow flag and I was stuck behind the No. 5, the team pulled me in early (for a pit stop). Then, I had a really good out lap. Eventually, that helped us get ahead, and from there, we could do our own race. I’m really happy to come out of this race with the best Cadillac. I think we did the best we could. It’s a good points day for the team. We had to work hard on the Whelen Engineering car during the weekend. But come race day, it was very good. I’m really happy. To keep the No. 31 car on the podium here for the fourth year in a row is quite positive.”

Tristan Nunez: “The start was definitely difficult. I just tried to keep the rears underneath me. We had a good pit stop and we made some adjustments. We’ll take it. It feels like a win to us. We started in the back, and with a little bit of strategy and a major out lap by Pipo, we got into this position. To bring the No. 31 Whelen Engineering Cadillac to the podium is a good day.”

No. 5 Mustang Sampling Cadillac DPi-V.R
Tristan Vautier, Richard Westbrook
Finish: Fourth Start: Fifth
Tristan Vautier: “We made the most of the opportunity. It was a rough weekend for us. We kind of struggled finding our way but hit it in the race, so we’re happy about that. Some things didn’t play out for us strategy-wise, but if somebody would have told us this morning that we would finish fourth, it would have been fine. A massive job from the team getting us to that point because last year we finished a lap down. We struggled on pace, but this year I think we were the strongest Cadillac over the last stints of the race.”

Richard Westbrook: “I think we absolutely maximized what we have. We had a really tough Saturday and a really tough warmup. We scraped it together and had a competitive car. We probably had a fourth-place car and we got fourth. I was surprised by how close all the Cadillacs were and all in all I’m really happy. We’re in a good spot.”

No. 02 Cadillac Accessories Cadillac DPi-V.R
Earl Bamber, Alex Lynn
Finish: Fifth Start: Third
Earl Bamber: “I think we had a good car today and think we had a car for the podium. But, we didn’t execute well and we got some damage on the nose. So, we just had to bring it to the end to grab some points. It’s a shame to see those ones go away, but that’s motor racing. We will rebuild as a team and come back stronger for the next one in Ohio.”

Alex Lynn: “Not the day we dreamed of today. I thought we had a very strong car, but we didn’t make it happen. We will move on to the next one in Mid-Ohio.”

No. 01 V-Performance Academy Cadillac DPi-V.R
Renger van der Zande, Sebastien Bourdais
Finish: Sixth in class (32nd overall) Start: Fourth
Steve Eriksen (team manager): “During the race, we had an intermittent power issue which causes the whole electrical system to shut down, including the power steering. We took it back to the garage, switched out a couple of components to see if that would make a difference. We were able to get the car started again and it had the same problem, so the more time we spent on it the more we realized we just need to take it back and diagnose the problem.”