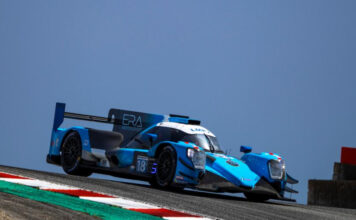 INDIANAPOLIS, Ind., (May 11, 2022) – Era Motorsport has a short drive this weekend from their Indianapolis-based shop to Lexington, Ohio for the fourth round of the IMSA WeatherTech SportsCar Championship, the Lexus Grand Prix at Mid-Ohio. The team is entering the weekend as the LMP2 class points leaders in the driver standings, ready for the variety of weather the mid-west road circuit may have in store for Sunday’s race.

The team recently traveled to Lexington, Ohio’s Mid-Ohio Sports Car Course for a private test, eager to get practice laps in for drivers Dwight Merriman and Ryan Dalziel, while the engineers obtained valuable data to get the jump on their race weekend set up. Though teams normally opt not to test in rainy conditions, Era Motorsport decided to get a few wet laps in, which may prove beneficial for this weekend’s upcoming event. While Friday’s track activities look to enjoy sunny and clear conditions, Saturday’s qualifying session may have afternoon thunderstorms, followed by a chance of scattered thunderstorms on Sunday, race day.

This will be the first time Merriman has raced at the 2.258, 13-turn road course and the first time since 2019 for Dalziel. Together with the team, the pair have momentum on their side, rebounding from an early retirement in round one at the Rolex 24 At Daytona to back-to-back podium finishes at the Twelve Hours of Sebring and WeatherTech Raceway Laguna Seca. The team’s second-place finish at Laguna Seca brought the squad to the LMP2 points lead, giving them strong footing to keep moving forward this weekend at Mid-Ohio.

The LMP2 class will account for six of the 24 entries competing in the two-hour and forty-minute sprint race. The GTD Pro class will not be racing in the event, leaving the DPi, LMP2, LMP3, and GTD classes to race for overall and class position on the hilly road course.

This weekend’s on-track activities will be condensed into a three-day weekend, with practice one taking place on Friday afternoon. Saturday will hold practice two and qualifying before the field goes green on Sunday. The Lexus Grand Prix at Mid-Ohio will air live on Sunday, May 15 starting at 2:00 PM Eastern on the USA Network and stream live on Peacock. International audiences can stream on imsa.tv or check IMSA’s International Coverage page.

While we don’t know what the weather has in store for us this weekend at Mid-Ohio, we’re expecting to be strong and consistent here. We’re coming off a great run at Laguna Seca, and we’ve also put in both some wet and dry laps to get ready for this weekend. We’ve got some good competition in the LMP2 class, but I’m feeling good about the team we have lined up.

Daytona was pretty rough on us. We had the early setback, but probably one of the best comeback races we ever had. With 23 minutes to go in fourth, we lost the gearbox. We had a good rebound at Sebring but got a puncture towards the end, otherwise, we would have been in contention. In Laguna Seca, we were strong from when we unloaded. Mid-Ohio is a continuation of that momentum and constant improvement. We try to do as much as we can with Dwight between races. There’s a balance in how hard you push your Am drivers to continue their development and racecraft. We tested at Mid-Ohio a few weeks ago to continue that development, and we were able to get in a couple of dry laps at the end of the day. Everybody likes to win races, but it takes consistency to win championships. Mid-Ohio ranks up there as one of the least enjoyable places in the rain, so hopefully, it stays dry.